Homepage
You are here: Home1 / Mike Paradise2 / Can “Bobette” Prevail Where Others Failed?

Bucklegirl Bobette, the reigning queen of Hawthorne, will attempt Saturday night to prevail where the last three horses have failed . . . finish first from the assigned 10-hole in a six horse field.

A week ago Bucklegirl Bobette extended her winning streak at Hawthorne to six in a row with another easy filly and mare Open Pace triumph for trainer Rob Rittoff. The latest was a 1:52 flat mile for tonight’s driver Travis Seekman. Earlier in the meet the 5-year-old Duneside Perch mare posted back-to-back Open triumphs with 1:50.3 miles. 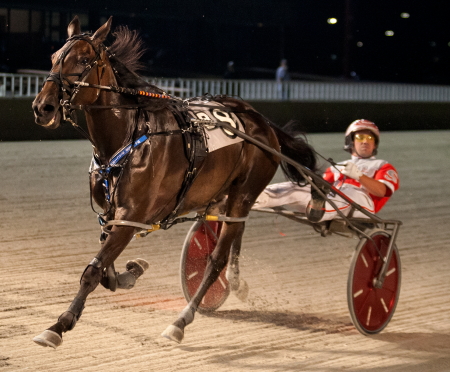 Bucklegirl Bobette made it six consecutive victories at Hawthorne last week. Travis Seekman will be back in the bike behind the ICF mare handicapped with the 10-post Saturday night. (Four Footed Fotos)

Last Sunday the trotter Walter White was the latest horse at the meet to come up short from an allocated 10-slot in a six-horse field. Trotters Anna’s Lucky Star and Picky Picky Valor also saw winning streaks end earlier from the same post designated by the Race Office.

However, the fete has been accomplished at this summer’s meet.

Town Temptress breezed in her last start for trainer Kelly Chupp however that 1:53 flat Open victory came almost a month ago (July 21). Last year the Artsplace mare took her lifetime mark of 1:51.3 at Scioto Downs in Ohio at the age of five.

Fast Invader: Two races later is the $10,000 Open Pace for “the boys” and coming to town is the Payton Ode trained 5-year-old A Bettors Risk fresh off a sparkling 1:48.2 conquest at Hoosier Park.

A Bettors Risk is no stranger to Hawthorne. His fastest mile in 2017 was a 1:51.1 clocking at Hawthorne, one of his nine season successes. The Bettor’s Delight gelding did have two unsuccessful starts at this year’s Hawthorne’s winter meet

A Bettors Risk landed the outside seven-slot for his Hawthorne return and inside of him are Sir Mammo (Ridge Warren), given the one-slot, and Terror Of The Nite (Kyle Husted), Ponda’s Prospect (Casey Leonard), Dakota Roadster (Travis Seekman), Hot Rod Dylan (Ryan Anderson) and Account Hanover (Juan Franco), in that order and all are past Open winners at the meet

Ponda’s Prospect looks to be back at the top of his game after a convincing 1:51 flat Open triumph a week ago for the Terry Leonard stable, a career fastest mile for the 4-year-old Shadyshark Hanover gelding. Ponda’s Prospect is listed as the 2-1 morning line favorite with a Bettors Risk next at 5-2.