By Mike Paradise
The second-to-last Saturday program for Hawthorne’s 2016 meet has some intriguing contests sprinkled throughout its 10 card.
There are three division of the Cardinal Pace eliminations for two-year-old colts and geldings to determine next weekend’s finalists, the first race is a prep for 9 of the 10 starters who will compete in the 18,500 (est.) Cardinal freshman trot championship and there are two Open Paces, one the $10,000 main event and the other with a $8,000 pot and designated as an Open II, or one-notch below the seventh race headliner.
The first three finishers in the trio of Cardinal eliminations will move along to next Saturday’s final along with one of three fourth place finishers. A drawing will take place during the week to determine that last finalist. 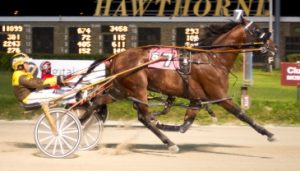 The stronger of the three $6,000 Cardinal freshman pace eliminations is the sixth race third split that has Incredible Finale champion Fox Valley Herbie (Mike Oosting), Night of Champions favorite Fox Valley Nemitz (Pat Curtin), Governor’s Cup winner Gabe Henry and Sporty Redhot (Matt Krueger), who swept his four legs of the Incredible Finale before a disappointing finish in the championship.
The Jim Eaton Stable’s Fox Valley Jeter (Mike Oosting), the second place finisher in the Incredible Finale Final, heads up the initial (second race) Cardinal split while the likely favorite in the second fourth race division is the Nelson Willis Stable’s Sparty (Mike Oosting) who was knocked off stride last Sunday in the stake’s consolation.
Only New Pay, the No. 1 horse in the first race, is ineligible for next weekend’s $18,500 (est.) Cardinal 2-year-old final where you will find Picky Picky Valor, Polar B, Dr. Spengler, Matt Q, Lougazi, Louscipher, Flash Forward, Cassisandfifth and Trixie’s Jethro who landed the 10-hole in this stake prep.
Pat Curtin is back to guide Louscipher in tonight’s trotting stake prep after steering the Roshun Trigg trained freshman to his $75,000 Erwin S. Dygert Memorial Championship.
The $8,000 Open II, tonight’s fifth race, drew Kelly D (Mike Oosting), Dinky Dune (Pat Curtin), Delight Fashion (Casey Leonard), Madoff (Randal Finn), Red Hot Art (Kyle Wilfong) and That Man Of Mine (Matt Krueger).
The likely post time favorite is Dane May’s Dinky Dune who was saddled with an outside post in the Molaro Final dominated by the winner Unlocked and leaves from the two-hole tonight.
The seven horse field for the $10,000 Open I has a new face in it and the likely low-end betting favorite. He’s the four-year gelding Aimo Hanover (Mike Oosting) who makes his second start and his first at Hawthorne for Clinard Properties of Mt. Sterling, Illinois.
The Artsplace gelding was plucked out of the recent Bloodhorse Sale by Springfield based trainer Tom Simmons for $60,000. Aimo Hanover put over $76,000 on his card this year racing mostly out of the Ron Burke Sable.
In mid-April Aimo Hanover rattled off a winning 1:50.2 mile at The Meadows, a five-eighths oval. Earlier in spring he took his lifetime mark of 1:50 flat at the western Pennsylvania racetrack.
Aimo Hanover was assigned the outside seven-slot by the Race Office and will take on (from the one-post out) Mystical Walter (Casey Leonard)., Sunset Dreamer (Kyle Wilfong), Holdingallthecards (Todd Warren), Montero Blue Chip (Matt Krueger), Mr. Coolie (Ridge Warren) and Lucky Crusader (Bobby Smolin).
http://harnessillinois.com/wp-content/uploads/2021/03/ihha_logo_white_wtext_v2-300x130.png 0 0 Mike Paradise http://harnessillinois.com/wp-content/uploads/2021/03/ihha_logo_white_wtext_v2-300x130.png Mike Paradise2016-09-17 12:28:292016-09-17 12:28:58Cardinal Freshman Pacers Take Center Stage