The top 3-year-old ICF colt and gelding pacers, the glamour division of horse racing, will strut their stuff Saturday night with the first round action of the Robert F. Carey Memorial Stake Series at Hawthorne.

With 20 state-bred sophomores passing the entry box the initial legs of the Carey were split into a pair of 10-horse $12,500 divisions, with the “Big Four” of the 2015 freshmen class looking to take their first stride towards a berth in the $100.000 (est.) Carey Final on Hawthorne’s Night of Champions in mid-September.

As 2-year-olds Dan D Dune, Royale Rose, BS Tyrrific and Wondrous Sport accounted for just about every major ICF stake victory and rewarded their owners with a huge hunk of the purse money in those first season stakes. 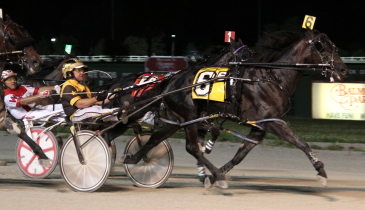 Cynthia Kay Willis Dan D Dune(pictured) put $120,628 on her card with over $83,215 of that amount coming via the home-bred’s Orange and Blue Colt Championship on Super Night. Dan D Dune also captured the $16,500 Governor’s Cup at Du Quoin for trainer Nelson Willis.

Dan D Dune will open as the 3-2 morning line favorite while freshman-stake champion Wondrous Sport starts off at 15-1 programmed odds from the 10-hole in the same eighth race co-feature.

Wondrous Sport took the $52,000 Mini Me Final and was runner-up on Super Night to Dan D Dune. The gelding won half of his starts (6-for-12) and banked over $88,000 for the Gary Rath Stable. He was sold this past winner and now races out of the barn of Springfield conditioner Mike Brink,

Lightly raced as a 2-year-old with only four starts, No. 6 Caffeine Kid (Todd Warren) will carry a four-race winning streak into Saturday that includes a sweep of a Late Closer Series. The Rodney Freese trainee is early 5-2 second choice.

Vying for the favoritism in the tenth race second division is the Lyle Scurlock Stable’s Royale Rose and BS Tyriffic (Kyle Wilfong), trained by Bob Sanders.

Royal Rose went 9 for 12 in 2015 and amassed $58,454 in earnings. He took a Hanover stake at Balmoral, the Cardinal at Maywood and the Springfield State Fair crown.

BS Tyriffic made eight trips postward and captured five of them when he pulled down over $68,000 in earnings. The Richesss Hanover gelding also won a Hanover at Balmoral and followed it up with a first place finish in a Review stake at Springfield.

Filly Domination: Friday’s opening rounds of the Plum Peachy ICF 3-year-old filly stake both saw dominating victories. Lexington Lady ($2.60) was much the best in the first split and Chae N Marg ($4.00) blew away the opposition in the second. 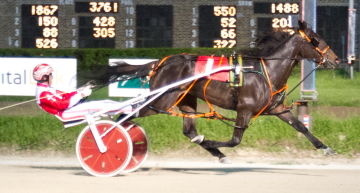 Lexington Lady (pictured), sent off at 20 cents to the dollar, rewarded her backers in front-end fashion, cutting fractions of 28.1, 57.4 and 1:26.2 before uncorking a 27.3 last panel in her 1:54 flat mile with driver Matt Krueger for her initial 2016 win for owner and trainer Hosea Williams.

Casey Leonard hustled away Char N Marg  from the seven-slot in the second $12,5000 division and was able to drop the Nelson Willis trained filly into third in the early going. Casey was content to keep her there while Likeafireballshot took the field to a 56.3 first half.

Midway through the last turn Casey took the even-money favorite out and she collared the leader at the three-quarter pole, reached in 1:25.4, and then went into high gear, pulling away to her half-dozen length while well in hand. Whiskersonkittens took second and Ashlee’s Fine Lady was third.