You’ve read countless times on just how important the draw for post position can be in a major race. On the other hand it’s rare that you’ve seen much about another significant draw that can take place in a horse race and that’s the drawing of multiple divisions, when a series has to be split.

That’s the case tonight, when 25 Illinois bred 3-year-old pacing colts and geldings passed the entry box for the opening legs of the Night of Champion Series for Robert F Carey Memorial.

The final field for the $85.000 (est.) championship on Saturday, September 24th, will be made up of the 10 highest point earnings in the four legs of the series. A first place finisher earns 50 points, then it’s 25 for a second, 12 for a third, 8 for a fourth, 5 for a fifth and 1 point for starting. 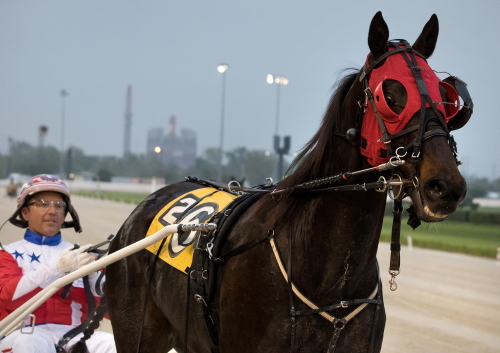 Obviously, a series leg victory can go a long way to making the Carey championship, so there’s no doubt some trainers were very happy with the draws for Friday’s three Carey series divisions. While some others I’m sure weren’t grinning from ear to ear.

The pre-Carey heavy favorite will be Fox Valley Gemini from the Terry Leonard Stable, unbeaten in 11 career starts, including nine straight as a freshman, when he was named the 2017 Illinois Harness Horse of the Year.

So far in his second season, Fox Valley Gemini has been bet down to overwhelming 1 to 9 odds in each start and was much the best in both ICF 3-year-old preps. The son of Yankee Skyscraper was a front-end winner (26.2 last quarter), in his May 12th season debut and then one week later, came off the pace with a wicked 26 flat last quarter and a 1:53 flat mile with something left in the tank.

Fox Valley Gemini hauled in $157,570 for his Atwater, Illinois owner Jim Ballinger and did it in 9 first season starts. In comparison, his eight challengers tonight earned a combined $20,000 less last year in a total of 72 trips postward,

The other pair of $12,500 Carey series divisions will go as five and six, both look very competitive with a number of ICF sophomores looking capable of coming away with the 50 points awarded to each winner.

Can They Take Out the Trash? A $10,000 Open I Handicap Pace headed up by the Leonard Stable’s Trashytonguetalker (Casey Leonard), will also spice-up the 11-race card. After a dominating 1:52.1 victory two weeks ago in his first start back in three months, Trashytounguetalker was assigned the outside 7-slot in the fourth race secondary feature.

In seven season starts, all at Hawthorne, Trashytonguetalker has made five stops at the winner’s circle while banking over $18,000.

The Jim Eaton Stable’s Caviart Midnight, who owns a 1:51 flat clocking at Ohio’s Miami Valley Raceway among his four wins, was assigned the six-post.

The first five Open Pace slots will be manned by: Southwind Indy, Bettor’s Promise, He Gone Jack, I’m An Athlete and Terror Of The Night.

Also to be decided Friday night, is a pair of $10,000 Cicero Claiming Series finals. The colt and gelding division is the second half of the early Daily Double, while the ninth race showdown for fillies and mares starts tonight’s Pick Three.