Hawthorne’s Night of Champions is a long way off, four months to be exact, however the method to land into the profitable ICF championships begin this weekend.

The 10 leading point earners after four legs of the Carey stake series earn a starting berth in the September 25th championship. A series leg victory is worth 50 points. Then it is 25 for a second finish, 12 for a third, 8 for a fourth and 5 for a fifth. A single point goes to a horse that starts in a series round.

While its often said it is’nt how a horse starts this series but rather how he finishes it when big prize is on the line, this is the time to gain some valuable series points, and rake-in some respectable purse money with two of the division’s big guns are silently on the sidelines,

The 2020 leading money-earning, state-bred juvenile pacers, ICF Two-Year-Old Colt Pacer of the Year Frontier Charley and Night of Champions winner Well Basically, evidently are not ready for their second debuts and were not entered for the first leg of the Carey.

That leaves the door wide open for one of tonight’s 10 starters to haul in the winner’s share of a $12,500 purse while zipping to the top of the Carey point standings.

Ideal Big Guy, a $19,000 yearling purchase, does boast a win as a freshman over Frontier Charley. It came in a leg of last year’s Incredible Finale series when the banked over $20,000 in his initial campaign for the Leonard stable.

Partyatmosasplace, a Watson Stable homebred, had a pair of seconds and thirds in in his eight juvenile starts, usually against the top horses in his division. The gelding won over $21,000 in 2020. Todd Warren will handle Partyatmosaplace for the first time in tonight’s Carey leg.

Despite landing the outside 10-slot, The Dossie Minor trained Bombay Bobby, also could be a major threat. The Major Bombay gelding prepped well for this race with a second-place finish last week’s and is another $20,000-plus earner as a freshman.

My price shot (20-1 in the morning line) for the gimmicks is BC’s Tufftiger (pp 4). His trainer Roshun Trigg is turning over the lines to fellow Mississippian Jamaal Denson, a 24-year-old “P” driver.

BC’s Tuffinger didn’t race particular well earlier this month prepping for this start, but he showed promise last year competing mostly at Springfield where the horse posted 7 wins and three seconds in an even dozen starts, often trading victories with Bombay Bobby.

If one Open on a racing program makes it a good one, and two move it up to an even higher level, then three consecutive Opens should make it something special for harness racing fans.

That’s the case this Sunday night at Hawthorne, and just to make the viewing even more intriguing, a pair of five figure series finals are also on the Chicago circuit racing program.

The $12,000 “Opens” start tonight with race two for horses and geldings. It’s followed by a solid filly and mare contest, and it ends with the third race trot where the Chupp Racing Stable’s Pine Dream (Todd Warren) looks to extend his current winning streak to four in a row enabling the veteran to make his 46th visit to a winner’s circle.

The second race Open is round two between the ICF stalwarts Fox Valley Gemini (Casey Leonard) and He’zzz A Wise Sky (Kyle Wilfong). They will have to contend with four other foes, including the Dean Eckley stable’s Castle Flight (Ridge Warren).

You might remember Castle Flight from the early days if Hawthorne’s 2020 Covid plagued meeting. The Panspacificflight gelding showed his heels to Fox Valley Gemini in consecutive Opens in front end fashion during late February and early March.

Former Illinois based trainer Bob Phillips is back in town and he’ll send out both General Dolan (Tyler Shehan) and My Buddy Ninkster (Travis Seekman) in the first headliner, My Buddy Ninkster went over the $600,000 plateau in career earnings with a win in his last start in Ohio.

Meanwhile Fox Valley Gemini surpassed the half-million mark with last weekend’s Hawthorne Open triumph in 1:50.4, facilitated by a wicked 26 flat last panel and the now six-year-old ICF champ did it in his initial pari-mutuel start of the year as the 3-2 second choice of the race.

Hezzz A Wise Sky looks to even the score and likely will be sprinting out again, this time from the handicapped six-slot for Triple ZZZ Stable of Justice, Illinois. The 2020 ICF Harness Horse of the Year has won exactly half (15 of 30) of his lifetime starts. 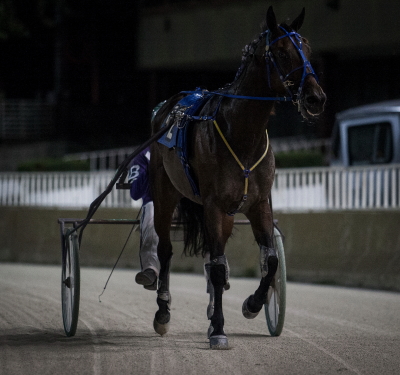 The Merv Chupp stable’s Pine Dream has his sights on a fourth consecutive triumph in tonight’s $12,000 Open Trot. Todd Warren is back to drive the nine-year-old gelding with an impressive 45 lifetime wins to his credit. (Four Footed Fotos).

Gals Take Over: Maggie Rhee, trained by her driver Todd Warren, was sent off at 20 cents on the dollar in last week’s filly and mare Open and performed as advertised, drawing off by three and one-half lengths in her 1:54.3 mile (26.3 last quarter).

Brooke’s Ocean (Jordon Ross), second best a week ago, gets a favorable post shift from the outside five to the one, while the third-place finisher Golden Paradise (Casey Leonard) benefits from a start over Hawthorne’s full one mile oval.

Dealmaker Hanover, under the care of trainer Brittney Dillon, has picked-up purse checks in her last five Open starts in Indiana, winning twice, including a quick 1:50 flat clocking a month ago and appears to be menacing threat.

On A Roll: The high riding Pine Dream has a classy foe back in action to take on tonight.

Robert Siberberg’s Walter White returns to Hawthorne in race three and the nine-year-old has won his share of Open trots in the past on the Chicago circuit. The trotter has notched 29 career wins and banked over $550,000 for his Farmington Hills, Michigan owner. He’ll start from the three hole. Tonight.

The head victory was the fourth in 14 season starts for the three-year-old Play Me Rock, owned and trained by Perry Smith of Crete, Illinois.