The $125,000 (est.) Incredible Tillie Final is a long way off, but an important first step to gain a starting berth in that lucrative ICF 2-year-old filly pace on Hawthorne’s Night of Champions, will take place this Friday night.

Two $12,000 opening round divisions of the Incredible Tillie stake series are on tap. With 13 state-bred filly pacers entered, the first legs were split into two divisions, that were not only different in numbers but also in familiarity as far as going to the starting gate.

Of the six freshman fillies in the second race, only the Dennis Brightwell Stable’s Poppy Seed (Mike Oosting) has a start under her belt and that was a fourth place finish eight nights ago.

On the other hand 5 of the 7 freshman in the second Incredible Tillie division have a pari-mutuel start. The two exceptions are the Tom Graham Jr. Stable’s Lotus Gram (Casey Leonard) and the Hosea Williams Stable’s Jazzy Bern (Brian Carpenter). 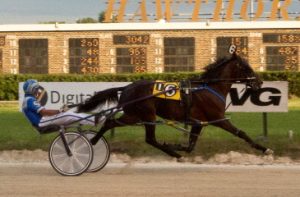 Fox Valley Jazzy looked very good in her winning debut for trainer Herman Wheeler, brushing to the top before the half (59.4) with Tyler Shehan and then drawing off by almost four lengths in a snappy 1:55 flat (27 flat last panel) for her Crystal Springs, Mississippi owner Demarrio Brown.

Shehan liked what he saw from Fox Valley Jazzy who romped in the slop a week earlier in her qualifier (2:01.3) with a 27.2 last quarter.

“She was nice and tight and she raced more like a 2-year-old racing in September or October than one making her first start in June,” said Shehan. “Fox Valley Jazzy was nice and smooth. Hopefully she’ll get even better and make some good money.  She’s a good gaited filly and if she races as confident as she is right now I think she’ll do well at Hawthorne. Last week I didn’t want to race her on the front-end but (on the backside) she wanted to go so I let her.” 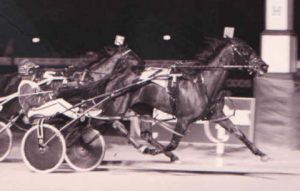 The Incredible Tillie stake series honors the Erv Miller trained ICF pacer who sparkled at the turn of this century. The daughter of Incredible Finale, out of the Ideal Society broodmare Kelly Guru, was a perfect 12-for-12 in her freshman season in 1999.

She swept the key ICF championships at Springfield, Du Quoin and the Filly Orange and Blue on Super Night and with her share of the $1 million bonus then being offered by the Illinois Department of Agriculture her first season earnings soared from $212,580 in purse money to $512,024.

Three Bagger: Casey Leonard had a driving triple Thursday night and it came in consecutive races, the fourth with Zone Blitz, the fifth with Rockin Praline and the sixth with JD Jay Dee.

Tim Curtin had a pair of winners, bringing home the 2-year-old Dee Rocks in race two and with the 4-year-old ICF pacer Caffeine Kid in race eight.