By Mike Paradise
With back-to-back triumphs in Hawthorne’s Plum Peachy stakes series in the rear-view mirror Quaid Racing’s Char N Marg looks to take another major step towards establishing herself as premier filly in the ICF sophomore pacing division with a conquest in Friday night’s $25,200 Violet Final.

Thus far this season Char N Marg is a perfect 3-for-3 against her state-bred pacing filly colleagues. Last week she took her Violet elimination in easy fashion with regular driver Casey Leonard by six lengths in a 1:54.4 mile.
A week earlier in the second Plum Peachy series leg, her first start on Lasix, she romped by five-plus lengths in 1:53.3 for the Quaid brothers—Patrick, Brian and Daniel—who bought her as a yearling for $5,000 at the Walker Sale.in August of 2014.
The Nelson Willis trainee’s only three season losses came in open company and twice in the meet’s $10,000 Open Pace, an event she also won back on June 10
Last year on her way to becoming the top ICF freshman pacing filly she pulled own over $125,000 and took the $115,000 Filly Orange and Blue on Super Night, the $20,500 Violet and a $32,900 Hanover, all at Balmoral.
Char N Marg was first or second in 12 of 18 starts and missed only one check and that came in the Madison stake at Hoosier Park.in late October. Two weeks later she was a strong second in Balmoral’s $78,450 American National.
Drawing nicely with the two-post in Friday’s ninth race headliner, Char N Marg will open as a heavy 6-5 favorite when she takes on Burry Me In the Sand (Gary Rath), the 23-1 up setter in last week’s other Violet elimination, along with LK’s Nancy Lee (Dale Hiteman), Fox Valley Gypsy (Kyle Husted), Ashlee’s Fine Lady (Matt Krueger), Likeafireballshot (Jared Finn), Art Angel Baby (Todd Warren), Lexington Lady (Bobby Smolin), Dakota Sleek (Ryan Anderson) and Dandy’s Diva (Travis Seekman).
Trot Favorites Fade: Thursday night’s Cardinal and Violet trotting stakes saw the betting favorites go down to defeat in both 3-year-old events.
The speedball Fear (Todd Warren) was sent off at overwhelming 1 to 5 odds but was pressured throughout, working very hard to get command before the 57.3 first half.
Casey Leonard meanwhile put Hail Caesar in the pocket behind Fear and when the Mike Brink trained gelding did shake loose late in the stretch he powered past to post a half-length victory.
Bands Ariston (Jamaica Patton), at 99-1 odds, came on strong to get third in the $21,700 co-feature, trotted in 1:59.3.
Hail Caesar’s win was his third in eight season starts for Morton, Illinois owner H H Wright. 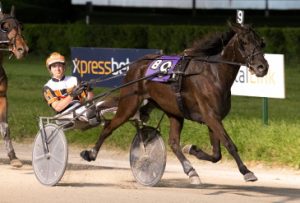 Fear’s stable-mate Vengeful, the 4-5 betting choice in the $20,100 Violet Final also saw her lead evaporate in the lane as the Steve Searle Stable’s Surviver DI grinded her way to a 1:59.3 triumph for driver Kyle Husted.
Vengeful battled early before settling into third. Driver Todd Warren had her on the move on the backside and she cleared the leader Awfully Emotional (Bobby Smolin) before reaching the half-mile pole in 59.3.
Husted also had Surviver DI on the move and came along side Vengeful. The pair battled through the third quarter and down the lane before the winner pulled away in the late going for her seventh victory in 15 starts and already No. 25 in less than two seasons of racing for Steve Renard of Hamilton, Illinois.
The 50-1 longshot Fox Valley Mirage (James Lackey) finished in a hurry to edge out Vengeful for runner-up honors.
http://harnessillinois.com/wp-content/uploads/2021/03/ihha_logo_white_wtext_v2-300x130.png 0 0 Mike Paradise http://harnessillinois.com/wp-content/uploads/2021/03/ihha_logo_white_wtext_v2-300x130.png Mike Paradise2016-07-15 13:26:532016-07-15 13:26:53Char N Marg Filly Too Beat in Violet