Homepage
You are here: Home1 / Mike Paradise2 / Chomping at the Bit? You Bet! 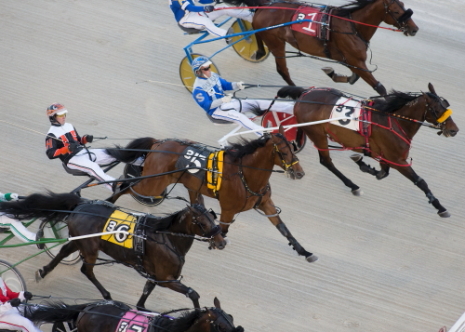 They’ll be off and racing again at Hawthorne when the meet restarts this weekend. (Four Footed Fotos)

“Chomping at the Bit” not only is a good description of our industry’s horses that have gone two and a half months since they competed, it also pretty much depicts the people who train, drive, and care for them.

And you can probably add the Chicago circuit players who enjoy wagering on Hawthorne races.

When the Hawthorne meet at long last resumes this weekend, without spectators, it’ll be 82 lengthy days since a race was contested over the big mile track. The local temperature was 38 degrees (six degrees above freezing) that mid-March evening. Tomorrow we’ll return to racing with a temperature more than double that.

Better Late than Never: Hawthorne’s Late Closer series events will get under way the first weekend back since the Covid-19 Pandemic put a halt to racing and most everything else in our state. Four Late Closer events will be sprinkle throughout the June 6th Saturday program and five more on the Sunday card

Originally scheduled in May, the Late Closers’ will consist of two legs, this week and the next, with the highest point earners in those two meetings moving on to their respective finals on either Saturday, June 20th or Sunday, June 21st.

Significant Change: Losing the entire month of May to the Covid-19 lockdown necessitated a major revision to the meet’s ICF stakes schedule. The first legs of the three-year-old Night of Champions series had to be moved to next weekend (June 13th and June 14th) from their original May 22nd and May 23rd dates.

The Cardinal and Violet pacing and trotting sophomore events that were to go the last weekend of May will instead be raced on June 20th and June 21st.

Since the second round of the three-year-old ICF stake series is on June 26th and June 27th, it causes those Illinois-bred stakes bound horses to compete three consecutive weekends in added-money events. The same second season horses that race this weekend would have a stretch of four weekends of competition in a row.

Tremendous Enough: Of the 22 qualifiers raced Monday afternoon and into the evening at Hawthorne the fastest winner was a 1:53.4 clocking by the Clause Gendreau trained pacer Tremendous Play. The six-year-old gelding was driven in front-end fashion by Juan Franco while prepping for his Hawthorne debut. Tremendous Plays spent much of his racing career at Yonkers, mostly in conditioned paces under the care of Richard Banca. The Shadow Play pacer has a mark of 1:52.4 on the New York half-mile oval.

Notable Qualifier: While it was only a qualifier Monday’s eleventh race between Hawthorne Open winners Fox Valley Gemini and Castle Flight was noteworthy since the two talented pacers figure to tangle a number of more times at the meet in the top overnight event.

Fox Valley Gemini (Casey Leonard) saved his best for last, pacing a quick 26.3 last quarter at the end of a 1:55 flat mile, outdoing his rival by almost two lengths. Castle Flight (Kyle Wilfong), who does his best on the front, raced in the two-hole behind the pace-setting Bold And Brassy, and had the lead in the stretch before giving way to the pride of the Terry Leonard Stable.

Too bad the top Open Pace isn’t among the 26 races on the Saturday and Sunday cards, so we’ll have to wait at least another week for the first Fox Valley Gemini-Castle Flight match-up since they last tangled all the way back on March 8th.

Juveniles Debut: The first crop of this year’s ICF freshmen to compete in the state came about on Tuesday’s Springfield Preview at the State Fair Grounds with the first four events of the 17 race card. The most impressive winner was Larry Price’s BC’s Tufftiger debuting with a 2:01.2 mile (27.4 last quarter) with Cordarius Stewart driving. The homebred Walker Place gelding, trained by Roshun Trigg, was almost four lengths the best.