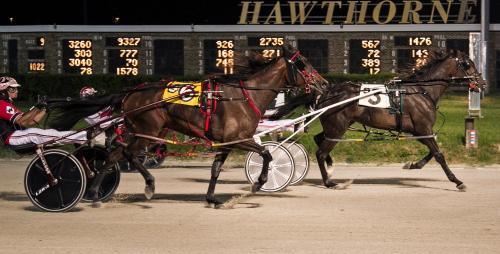 Connie On The Go (Ridge Warren) and Princess Mooss (Kyle Wilfong), the one-two finishers in round one of the Incredible Tillie, will battle again in tonight’s $43,100 Violet Pace for ICF two-year-old fillies. (Four Footed Fotos)

One victory doesn’t make a successful campaign for racing . . . on the other hand it certainly can put a horse on the right path to a fruitful first season.

Jamaica Patton, the trainer of the Incredible Tillie first leg stake winner Connie On The Go, is well aware of that fact but the Springfield, IL based horseman also knows there was more at stake than just a victory when Connie On The Go won her debut two weeks ago.

While the winner’s share of the Incredible Tillie’s $17,500 had to put a smile on Jamaica’s face, that’s not what had him really excited. “It’s the points,” he spouted out. “I want to be there with the filly when we go for the big money”

What the 39-year-old Mississippi native was referring to was the 50 series points awarded to Connie On The Go for her half-length victory when she was nicely handled by Ridge Warren. Only the top ten point earners in the ICF two-year-old filly stake series will start in the Incredible Tillie Final on Hawthorne’s Night of Champions.

The Sportsmaster filly’s 1:59.3 triumph in her pari-mutuel bow gave her a leg up on her Illinois bred competition to gain the September 19th championship for her Illinois owners and breeders Ron Phillips (Athens) and John Carver (Rock Island). She’ll open as the 7-5 morning line favorite tonight.

Connie On The Go is a daughter of the Incredible Finale broodmare Kyra Revrac, and Jamaica is very familiar with the mare’s offspring. 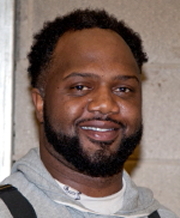 “I like her whole family,” continued Jamaica who has “Connie’s” half-sister Khalassi in his barn and drove her full-sister A Girl Named Jim to a victory in last year’s first round of the Incredible Tillie. Unfortunately A Girl Named Jim died not long after that race.

Jamaica wants a filly still fresh for the Night of Champions so he won’t “over race” Connie On The Go and instead will “pick my spots” with her.

One of those right spots is tonight’s Violet where she’ll leave from the seven-post with driver Ridge Warren in an eight-horse field.

Jamaica also has Dandy’s Duchess in the stake event, a $40,000 bought as a yearling and he’ll drive her away from post two. “I’m taking my time bringing her along,” said Jamaica. “My owners (Phillips and Carver) paid a lot of money for her and I think she’ll end up being just as good as Connie On The Go.”

The Gary Rath Stable’s Princess Mooss, second in the “Tillie,” has the six post while the third place finisher Cleary The Bomb (Todd Warren) goes out from the four slot for trainer Angie Coleman. 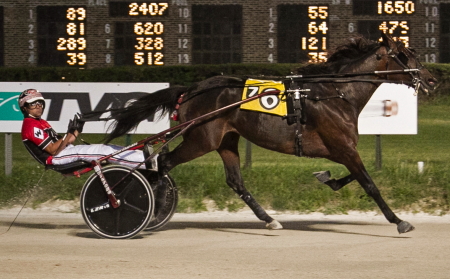 The Illinois champion Annas Lucky Star (Kyle Wilfong) came away with her 35th career victory in last week’s Open Trot. The six-year-old mare has the outside eight-slot in tonight’s $10,500 Open that goes as race seven. (Four Footed Fotos)

Open Trot is Open: The Saturday card also got a boost when the $10,500 Open Trot filled with eight starters. The seventh race secondary feature was handicapped and drawn by groups. Post one was assigned to Lourhianon (Tyler Shehan). Slots two through four were drawn and went to She’s Got Bliss (Jim Lackey), Louzotic (Kyle Husted) and Very Very Fast (Travis Seekman) respectively.

The four trotters with at least one Hawthorne Open victory in their last three starts drew for the 5, 6, 7 and 8. They’ll be manned by Pine Dream (Todd Warren), Call For Justice (Casey Leonard), Lindy’s Big Bang (Ridge Warren) and last week’s Open winner Annas Lucky Star (Kyle Wilfong), in that order.

The Jim Eaton trained winning freshman was raced in seventh by Warren in the eight horse field during the early going and was more than six lengths behind at the 58.3 half before Todd got him on the move.

Frontier Charley paced a 28.1 last panel to finish one length ahead of the 30-1 longshot Mekkas Big Guy (Tyler Shehan), who also came home in 28.1. The 3-5 favorite Well Basically (Kyle Husted) held on for third after racing without cover from the backside on.