The four called off for this year are the fairs for June 8th at Martinsville in Clark County, June 9th at Carlinville in Macoupin County, along with the Macon County fair event at Decatur, slated for June 13 and the June 24th Henry fair at Cambridge.

Two more mid-June County Fairs with harness racing have been postponed, Jasper County at Newton (scheduled for June 21st and 22nd) and the June 23rd Greene County at Carrollton. The Newton Fair will be moved to dates in August. The new date for the re-scheduled Carrollton Fair has yet to be announced. 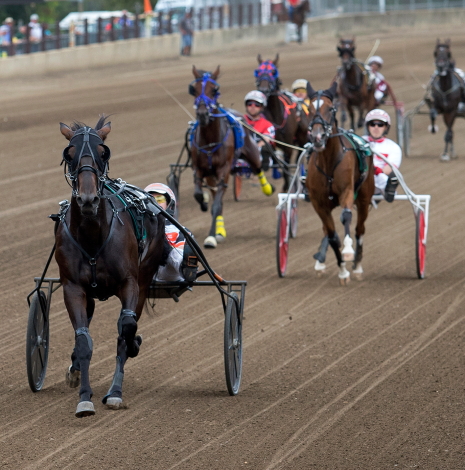 Will they be trotting down the stretch this summer at the Illinois State Fair at Springfield? (Four Footed Fotos)

Not Looking Good: At a recent press conference held in Chicago Illinois Governor JB Pritzker said there was little hope left that the Illinois State Fairs would take place this year. The Springfield Fair is scheduled for August 13-23. Harness racing at Du Quoin is slated for Friday night, August 28th and Saturday afternoon the 29th.

However, if the Springfield and/or the Du Quoin State Fairs do get cancelled it doesn’t necessarily mean its important ICF stake races for horsemen are doomed. At this time everything is still on the table for them to get raced.

While a cancellation of the Illinois State Fair necessitates a closing to the general public its races could still be performed on the Springfield racetrack. Another possibility is to have them moved to Hawthorne and be raced on a Wednesday or Thursday or be incorporated into a couple of its weekend summer cards. Last year the Illinois bred stakes at Du Quoin were shifted to Hawthorne to be contested after being rained out twice at Southern Illinois facility.

We’ll provide you with more information on the status of upcoming Illinois County Fair meets and the State Fair stakes when they become available.

Racing Tonight Elsewhere: At long last somewhere in the nation they’re off and racing tonight. Too bad it isn’t in Illinois.

The first to end the two and one-half months nation-wide shutdown of harness racing is in Ohio where Scioto Downs rolls out 12 race programs on both Friday and Saturday nights.

Scioto Downs had a total of 32qualifiers raced last weekend, 16 each on Saturday and Sunday. Northfield held 14 qualifying races last Monday afternoon, 15 more on Wednesday and another 16 yesterday (Thursday) afternoon.

Northfield Park will begin racing again on Tuesday, May 25th, with additional programs the following Wednesday, Friday and Saturday.

Being the first track back to race in many weeks you can expect Scioto Downs to have some huge mutuel handles this weekend.

Getting Close: With an expected go-ahead from the State of New Jersey the Meadowlands will reopen for racing on June 5th. New York racetracks have permission from Governor Andrew Como to race without fans starting June 1st. Tioga Downs and Monticello Raceway both are expected to be ready to go at that time.

Meanwhile in Illinois the long wait goes on.