In this circumstance, we’re talking about some ICF 3-year-olds competing this weekend at Hawthorne and the dilemma their connections faced, as to where to enter them.

Some sophomore horses are skipping the first $12,500 legs of either the Carey stake series for colts and geldings, the Plum Peachy for fillies, or Sunday’s two Dygert trots, one for the girls and the other for the boys.

Instead, their connections have decided to race them in Friday’s Late Closer finals that offer pretty much the same, or a bit better, pots. 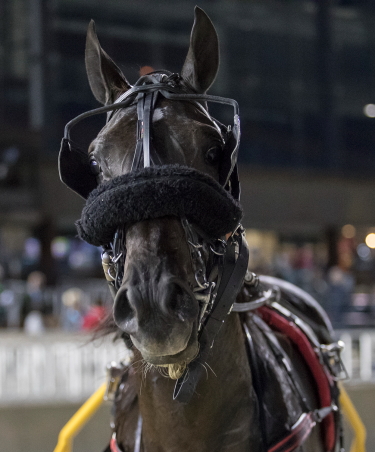 Meyer On Fire, the 2018 Illinois 2-Year-Old Colt Pacer of the Year, makes his sophomore debut tonight in the first leg of the Robert F. Carey stake series. (Four Footed Fotos)

Lourhianon dominated in his two legs of the Daryl Busse series and I have him listed at even-money in tonight’s $14,200 final, so it’s not surprising he’ll pass on Sunday’s first round of the Ervin F. Dygert for trotting colts and geldings.

It’s more of a gamble for Friday’s Busse finalists Banner Blue (Erwin Dygert), She’s First Class (Beulah Dygert) and Lou Scion Lou (Beulah Dygert), but keep in mind the 10 highest point earners in each stake series make the Night of Champions finals and there are three more legs after this weekend to earn those points.

Moreover, there’s no guarantee your horse will be in tip-top shape, when the other stakes legs are contested later on. He or she is healthy now, so going for some decent dough at this time makes sense, especially if your horse is one of Late Closer finalist betting favorites.

A one or two week earlier start of Hawthorne’s summer meeting would have a long way to avoiding these type of racing predicaments for horse owners and trainers.

There are only 21 weekends between the start of Hawthorne’s harness meet and the September 21st Night Of Champions. That may sound like a lot but it isn’t. It’s like trying to fit 10 pounds of you know what into a five bound bag.

When all of the stakes series legs were planned out for the month of August with the Springfield and Du Quoin State Fair meets had to be skipped, and the next weekend had to be tossed out to accommodate the upcoming Cardinal and Violet stakes for both gaits and sexes.

There are four legs of the 3-year-old Night of Champions stakes series to be raced, one each in the months of May, June, July and September to be fit in.

The ICF 2-year-old stake series that usually begin in mid-June, also, has four legs to be squeezed into the Hawthorne harness meeting puzzle.

If the Hawthorne’s Late Closers could have started, say on April 27th, there wouldn’t have been conflict between  those series finals and the initial legs of the Night of Champion series.

A week earlier start for the spring thoroughbred meeting ,would have given the runners the same amount of racing dates for the year and there usually isn’t much of a difference weather-wise for the second or third week of March. It’s always a gamble in March or for that matter in April, as well in the Chicagoland.

Hawthorne’s winter meet this year ran through the weekend of January 11th and 12th and the temperature never got about freezing (32 degrees) either that last Friday or Saturday.

I’ll get off my soapbox and get back to Friday’s card. 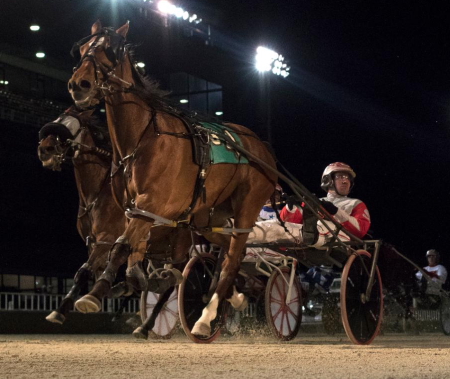 In race nine tonight, last season’s ICF freshman colt champion Meyer On Fire, makes his 3-year-old debut in the opening leg of the Carey stake series with Tim Curtin taking over his lines.  The Erv Miller trainee landed the eight slot in a bulky 11-horse field however the dangerous Ken Rucker trained pair of Maximus (Kyle Wilfong) and The Bucket (Casey Leonard), the second and third place finishers in the 2018 Incredible Finale championship, didn’t draw any better. Maximus has the seven and The Bucket the nine.

Lourhianon (Tim Curtin) and Trouble For All (Larry Lee Smith), easily victorious in each of their first two Daryl Busse series legs, meet for the first time in the $14,200 final, race five.