There are a number of significant final legs of Night of Champions series on Friday night’s Hawthorne racing card and in some events a check earning finish could be the difference for a horse competing next weekend in a lucrative ICF series final, or for a much smaller purse in a stake consolation.

However, perhaps more of the public’s attention will be on the $20,000 Robert S. Molaro prep race, the fifth event on tonight’s 10-race card. That’s because the stake’s defending champion Unlocked is here and many of us don’t know what to expect from the veteran gelding this time around.

The now nine-year-old Unlocked, with over $600,000 in lifetime earnings, recently joined the stable of veteran Illinois based trainer Nelson Willis, with only one unsuccessful start in the last two months, a ninth place finish at Northfield Park on July 6th. 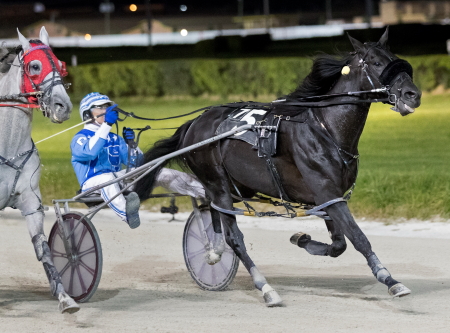 It should be noted that Unlocked’s July 6th race also followed a two-month layoff. Tonight’s race will be his 15th of the year and the horse has banked less than $29,000 in 2019 for owners of Megan Rogers Stable of Chicago.

On the other hand his regular driver Jim Pantaleano didn’t come all the way here from Pennsylvania to chalk up some airline bonus miles.

Unlocked has a career fastest mile time of 1:49 flat, taken as a 5-year-old on the five-eighths western Pennsylvania racetrack. At the age of three, the colt was an easy winner of the Pete Langley Memorial Championship at Balmoral Park on Super Night 2014.

Unlocked landed the outside seven-slot tonight and opens at 5-1, while the pre-race favorite Fox Valley Gemini (7-5, Casey Leonard), gets away from a rare middle-of-the-pack slot with the five.

The seventh race, final leg of the Robert S. Carey Memorial series, brings out all the leading point leaders who have sewed up a championship start: Maximus (175 points), Meyer On Fire (150), Fox Valley Triton (87), Coming Up (43), The Bucket (37) and Fox Valley Julius (32).

Smash N Sagebrush (25) and Frontier Muffler (22), look to be in good shape to advance while tonight’s three other starters: Master Sage (11), Old Swamp Master (6), and Sporty McGrew (1) will likely battle it out for the last two starting positions in the Carey final.

The last series round of the Incredible Tillie two-year-old pacing stake for fillies is next up on the card. Five of its ten starters tonight are championship bound: Double Parked (225 points), Sign Her Up (63), Fox Valley Exploit (63), Ashlees Fine Girl (62) and Sleazy Gal (50).

Still to be determined are the other five Incredible Tillie championship fillies. Among the other eighth race starters hoping to be one of those finalists are: Dancin Eyes, Amazon Princess, Mollie Hotspur, Ashlees Spur and Fox Valley Nia.

Star Performer: The overwhelming 1 to 10 favorite Anna’s Lucky Star ($2.10), was given a winning pocket trip from driver Kyle Wilfong and proved to be two lengths the best in last night’s Plesac stake prep for ICF aged trotters.

Talk About Valor (Casey Leonard), took the field five horse field to a modest 28.4 first quarter and strolled through 29.1 and 29 flat middle quarters, before Anna’s Lucky Star came out at the eighth pole and powered past. The Nelson Willis trained five-year-old mare trotted a quick 27.1 final panel in the 1:54.3 mile to finish two lengths ahead of Gerald Hansen trainee.

Anna’s Lucky Star is owned by her breeder Danny Graham of Salem, Illinois.