Homepage
You are here: Home1 / Mike Paradise2 / Don’t Kiss Off This Saturday Night

The last Saturday program of Hawthorne’s winter meet is a good one with a pair of $30,000 ICF events, the Open Trot, the Open for filly and mare pacers, and with six of the eight races being offered boasting five-figure purses.

If I had to single out of the most captivating race on the card, I would select the eighth race $30,000 event for ICF filly and mare pacers.

It pits a likely upcoming star of the division Kizzzmelikeumissme, unraced as a two-year-old, against two of the very best in the freshman class, Night of Champions winner Apple Valley and Rollnroz, an 11-time first season winner including a series division of the Incredible Tillie.

Kizzzmelikeumissme has made only four career starts however she’s look very good in each of them for Triple ZZZ Stable of Beecher, Illinois, winning two and a game second in the other pair, and she’s a full sister to two-time ICF Horse of the Year He,zzz A Wise Sky.

“She’s green but she is coming along very well. She reminds me a lot of her brother,” said her trainer, John Filomeno.

“Kizzzmelikeumissme showed ability as a two-year-old, but she wasn’t ready to race last year. She did a lot of growing and she’s a big filly now. I’m looking forward to her racing against some of last year’s better Illinois bred fillies.” 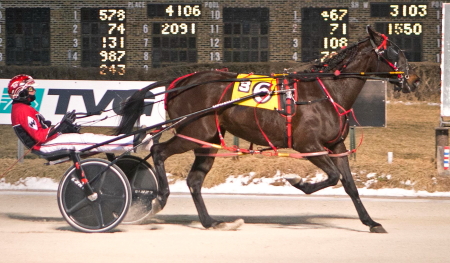 Both fillies haven’t competed in a pari-mutuel race since last September and each qualified last weekend. The question is: How tight are they for tonight’ $30,000 event?

Apple Valley came on strong at the end of her juvenile season of trainer John Molitor and was named the 2021 Illinois Three-Year-old Filly Pacer of the Year for Glenwood, Illinois owner Michael Perrin after hauling in over $80,000 in purse money.

Gary Rath’s Pattycake Moose, programmed at 4-1) also figures to be in the thick of the race. The Major Bombay filly won a pair of Hawthorne races in early February before being scratched sick on Feb. 19. After a month off she obviously needed last week’s outing.

The fourth race $30,000 ICF trot is a compact five-horse field headed up by Romantic Warrior (pp 1, Gary Path) and Mr Mizzou (pp 4, Brandon Bates). Both sophomores come off victories in their last start and look primed for big efforts.

Their opposition consists of Lous Lancelot (Casey Leonard) and a pair of first-time starters—Good Boy (Kyle Husted) and Killjoy (Kyle Wilfong). Both are sons of Lou’s Legacy,

Good Boy was a $10,000 yearling purchase at the 2020 Illinois Classic Sale by trainer Erv Miller. Killjoy is a Curt Grummel home-bred and a full brother to Curt’s 2018 Erwin Dygert Bight of Champion victor Big Lou. Killyjoy is bred and owned by Dr. Patrick Graham and Lockridge, Iowa and will race with totting hobbles.

A Pair of Opens: Shirley Steele’s Talk About Valor (Travis Seekman) guns for his fifth Open Trot triumph of the winter meet and was allocated the outside five-slot after his romping victory a week ago.

The sixth race $13,700 filly and mare Open pace has been topsy-turvy all meeting long with seemingly a different weekly winner tonight’s is another competitive affair.

My Uptowne Girl (Travis Seekman) and Fox Valley Exploit (Kyle Husted) drew for the five and six slots with Exploit landing the outside post.

So, grab your favorite beverage, have some snacks on hand, and sit back and enjoy the show.

Last night’s Hawthorne races were cancelled due to poor track conditions. The Friday program will come back in full on Sunday at 4:30 PM followed by the originally scheduled Sunday card at 7:15 PM.