Saturday’s two Late Closer Series Finals—the $14,830 Bob Larry and the $15,400 Mike Paradise—look to be quite different events for the betting public to handicap, at least on paper.

Just a scant nose separated the pair in last week’s second leg with the 1 to 9 favorite Hot Rod Dylan hanging on despite a sizzling 26.3 last quarter by Fox Valley Nemitz.

For a second straight week the front-stepping Hot Rod Dylan drew the seven-slot again while the late-charging “Nemitz” again landed the rail. No other pacer in the eight horse field has gotten within 4 1/2 lengths of Hot Rod Dylan at the end of his two winning legs thus far in the series.

Looking to reward some longshot players are Sporty Redhot (Kyle Wilfong), Fourboltmane (Tim Curtin), All In No Out (Bob Smolin), Slzburgerslzburger (Juan Franco) and He Gone Jack (Ridge Warren).

On the other hand the fifth race Mike Paradise showdown is as wide-open as it gets with really no-clear cut favorite and only Frontier Fred (30-1, Richard Finn) a genuine longshot in the race. 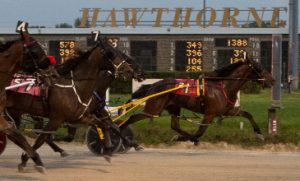 Ima Skydancer (Mike Oosting) has two series leg victories, both close decisions, while Sullivan (Casey Leonard) and Causway (Mike Brink) have one each. All three pacers are trained by Brink but will race uncoupled in the fifth race showdown.

Paradise contenders Commondiscourtesy (Kyle Husted), In Your Eye (Ridge Warren), Kid Rock (Kyle Wilfong) and Zone Blitz (Tyler Shehan) were beaten in their respective second legs by less than one length. The fourth place finisher in the first leg was only 1 and 1/2 lengths behind the winner.

Hawthorne’s morning line has Sullivan the 5-2 favorite with Ima Skydancer at 4-1. I think the favoritism will go the other way around by post time and Brink agrees.

“Ima Skydancer will probably be the favorite because of the tougher battle he had last week. How many times was he moved and he still didn’t get beat?” said Brink.

And Ima Skydancer drew the one-slot again for a second straight week.

“I could make a case for any of my three starters winning. It’ll probably all come down to the trip,” continued Brink. “I have no idea who will win this race. I hope it’s one of my three but some of those other horses have been right there at the finish in this series. We’ll just have to see how the race plays out.”

Sharing the Saturday spotlight with the two Late Closer Finals is the third race $11,000 Open II Pace for fillies and mares with posts draw by groups. 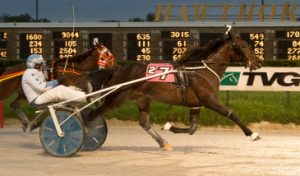 The Hard Way: It’s very common to read about a winner getting a good trip but in the case of last night’s Bea Farber Series Final the betting favorite I Could Care Less ($5.80) instead got a poor trip and still came out on top.

Driven by his owner and trainer Keith Crawford I Could Care Less raced a good portion of the mile on the outside of Energy Bar and still took the winner’s share of the $14,000 purse by one length on a sloppy racing surface.

The 1:57.4 mile was the Michigan bred trotter’s fourth victory in his last seven starts. 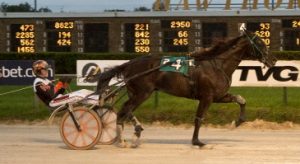 Husted left with Bands Houdini ($6.60) and turned a pocket trip behind the pacesetting Picky Picky Valor into a 1:59.1 winning mile in the slop. The ICF gelding is now 3 for 5 in his second season campaign for Illinois owners and breeders Steve Searle (Grant Park) and Flacco Family Farms (Alexis).

Driver Kyle Wilfong had the hot hand Friday night bringing home five winners on the card including four in a row, races 4, 5, 6 and 7.

Your author had an enjoyable evening as well. My top choice in race ten Coal Hanover (Kyle Husted) popped at $33.20 and my price shot Cole Heat (Ridge Warren) followed in the next race at $15.20.

Legislative Update Pictures Can Say It All
Scroll to top