When the balloting gets under way later in the season for the 2022 Illinois Harness Horse of the Year, one of the prime contenders should be the gifted three-year-old trotter Lousdobb from the barn of trainer Steve Searle.

The gelded son of Lou’s Legacy wrapped up divisional honors for a second year in a row with his victory in last Saturday’s $88,000 Erwin F. Dygert Memorial trotting championship, nicely handled by his regular driver Casey Leonard. 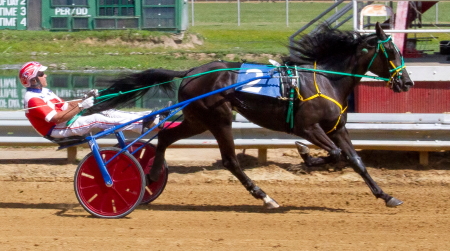 The Dygert victory was Lousdobb’s fifth in a row and gave the pride of the Searle stable a gaudy season record of 8 wins in 10 starts and the $44,000 share of the $88,000 pot propelled the horse’s purse earnings for the year to $114,720 for owners All-Wright Racing LLC of Morton and Flacco Family Farms LLC (Alexis, IL), also the breeders of the good-looking trotter.

A bad foot and a bad break likely kept Lousdobb from a ninth season win, and possibility a tenth and a unbeaten 2022 campaign.

After the horse’s Dygert win his trainer explained Loudobb’s problems in midseason after the horse won his first three starts that included the Cardinal stake and five consecutive more in August and September.  Loussdobb went off stride in those only two losses.

“The horse had an abscess in his foot,” revealed Searle. “We scratched him out of the first Dygert prep and thought he would be okay for the summer final, but he started pacing at the (July 22nd) start. Two weeks later he raced at Altamont, and it appeared his foot was still bothering him.

“The horse had a 27-length lead (at the half) when he made a break. It was a heartbreaking loss,” added his veteran Illinois based trainer. “He’s really a good horse.”

No doubt about that statement.

In two years of competition Lousdobb has raked in $192,851 for his Illinois owners, taken a new mark of 1:54.1(Springfield), and has made 11 trips to the winner’s circle in an even 20 starts.

The trotter swept the championships at both Illinois State Fairs this year and his Night of Champions victory gave him back-to-back ICF stake final wins on Hawthorne’s showcase evening of racing.

NOC Finalists in Action: There are some interesting races on today’s 13-race card that gets under way at noon with some top-notch Illinois bred youngsters going the gate.

In race two the recent Maurello Night of Champions runner-up Scorecard Dandy goes postward against a field, like her, have been Hawthorne Open participants this summer.

Gary Rath gets the catch drive behind the four-year-old Scorecard Dandy who is having a breakout campaign for trainer Gregory Kain with nine wins and earnings of almost $114,000.

The Revenge Shark filly won the $50,000 Lt. Governor Cup in late August at Du Quoin and a win today would put her over the $90,000 mark in her juvenile season.

Casey Leonard will take over the driving chores on the Cassis gelding with a two-season bank account of over $180,000.

Five Will Do: Casey had himself a very productive Thursday’s opening day of the abbreviated Springfield meet.  The 45-year-old from Harvard, Illinois brought home five winning horses. Cordarius Stewart and Kyle Husted did quite well, too. Both had a three-bagger.