The third Sunday program of Hawthorne’s harness racing meeting has a new look . . . make that a better look.
.
The track’s $12,000 Open Pace and Open Trot are both on tonight’s 11-race card, giving it a much more attractive program to wager on. Additionally, both Opens have increased in field size since the last time they were raced.

The fourth race Open Trot, drawn by groups (1-3) (4-6) (7-8) grew from five horses two weeks ago, to eight horses for tonight and the additions are significant. 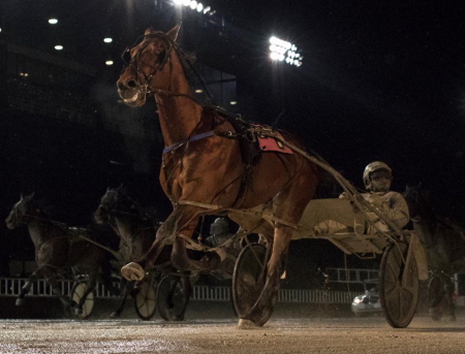 Leg two of tonight’s Phil Georgeff series is next for Captain Mulzac (Ronnie Gillespie), shown here on a sloppy track cruising to victory a week ago in the 3-year-old colt’s first pari-mutuel start. (Four Footed Fotos)

A couple of polished invaders, Double A Goldrush (pp 5, Ross Leonard), and Another Breather (pp 6, Ridge Warren), will make their local debuts in the race and take on the first Open winner of the meet Pine Dream (pp 8, Travis Seekman).

Double A Goldrush is a 5-year-old Elegant Man gelding who swept the Bessinger series at Ohio’s Miami Valley Raceway in February, when it was contested at three different distances. The trotter went unplaced in a Hoosier Park Open last week, his first race back in about three months.

Another Breath is one of two Kyle Husted trained trotters in the fray. Big Expense (pp 2, Kyle Husted), is the other. Another Breath, listed 7-1 in the program, shouldn’t be overlooked. The 6-year-old trotter comes in from The Meadowlands where the Ohio bred gelding battled some good trotters. He has a mark of 1:53.1, taken at Miami Valley last year, and over $360,000 in career earnings.

Justlikehim (pp 1, Brandon Bates), fresh off an easy 1:58 win last week in a conditioned trot, completes the co-feature that shares the Sunday limelight with the third race Open pace, a six horse field eight days ago compared to nine horses across this time around.

The 9-5 first flash favorite, is the two-time Illinois Horse of the Year Fox Valley Gemini (pp 6, Casey Leonard), after he zipped past with a 26.2 last quarter in his 1:51.1 victory over many of the same horses he’ll take on tonight.

The race was drawn by groups (1-4) and (5-9) so landing the six slot isn’t a bad thing for the star of the Terry Leonard stable with now over $300,000 in career purse earnings on his card.

And There’s More: Supporting the co-feature Opens are the second legs of the Mike Paradise and Phil Georgeff pacing series.

The second race Paradise, limited to ICF 3 and 4-year-old pacers, is a rematch between Waymore (Brandon Bates) and Fox Valley Triton (Casey Leonard), the one-two finishers respectively in last week’s opening round when they were separated by just a neck at the end of a 1:57.2 mile on a sloppy track.

Roshun Trigg’s Captain Mulzac (pp 6, Ronnie Gillespie), figures to be heavily bet down in the Phil Georgeff, after more than a three length triumph a week ago in leg one, the 3-year-old colt’s pari-mutuel bow.

Plenty of Heart: The Mike Brink Stable’s Hart To Heart ($5.60), stayed perfect at the Hawthorne meeting when driver Ridge Warren rallied the ICF pacer to a new lifetime mark of 1:52.3 in last night’s second leg of the Bob Larry Series.

The 4-year-old gelding, owned by Donna Crebs of Cantrall, Illinois and Judy Conzo of Lincoln, Illinois was almost one length better than Heza A Real Diamond (Tyler Shehan), when he notched his third straight victory.