Homepage
You are here: Home1 / Mike Paradise2 / Driver’s Race Going Down to the Wire 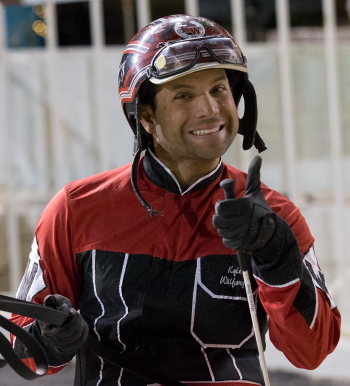 Illinois native Kyle Wilfong has taken over the top spot in the winter meet of Hawthorne’s driver standings with 12 racing programs to go. (Four Footed Fotos)

We’re already in the homestretch of Hawthorne’s winter harness racing meeting. After Sunday’s card there are only three weekends of racing left (9 programs) and its now rather obvious that the driver’s race will go down to the wire.

As we head into tonight’s action 30-year-old Kyle Wilfong holds a two-win lead with 35 dash winners, Veteran Mike Oosting is close behind with 33 and perennial Hawthorne champion Casey Leonard has 31.

All three drivers are clicking at about at 30 per cent winning clip.

Wilfong’s six bagger last Saturday vaulted the Illinois native to the top spot and into a position to come away with his first Chicago circuit title.

The Watseka, Illinois native began driving in 2010 when he had 146 opportunities as an 18-year-old. One year later he began his professional driver career in earnest with 1,211 trips to the gate and brining home 126 winning horses.

Kyle has more than 100 winning drives in the last nine consecutive years and in the last five seasons, horses he’s guided, have collected over $1 million in purse earnings.

Casey has finished on top at every Hawthorne meet since the Cicero, Illinois track took over in 2016 as the lone facility for Illinois harness racing. The 59-year-old Oosting has won so many Chicago circle driver titles that I lost count.

Let’s put it this way, Mike’s Balmoral and Maywood top driver titles are in the double digits. I think at one time he won six, or maybe it was eight straight, consecutive Balmoral Park driver titles.

The current trainer’s race has settled into a two horsemen battle. Terry Leonard of Harvard, Illinois currently holds the top spot with 18 while Michigan native Brittany Dillion is close behind with 16.

Percentage wise conditioner Gerald Hansen’s horses are popping at a 25 per cent clip, tops for trainers that have started 30 or more horses at the meet.

Inviting Pots: The Hawthorne Race Office has announced it will offer four races with a $30,000 purse, each for ICF horses of both gaits on Hawthorne’s closing weekend of the winter meet.

No nominations or starting fees are required.

The $30,000 ICF Pace and Trot for males will go on Friday, March 18th while the state-bred trot and pace for fillies and mares will be contested on Saturday, March 19th.

Job Well Done: Kudos to the Race Office for their creativity to somehow put together tonight’s eight race program. They certainly didn’t have much to work with.

Tonight’s scheduled $13,700 Open Pace was shelved when only He’zzz A Wise Sky and Fox Valley Gemini were entered.

A $10,700 race for three-year-old pacers received no entries.  The $10,000 and $15,000 claiming events also drew zip. Two other scheduled conditioned events landed only one horse each.

Nevertheless, a lot of “mixing and matching” by the Race Office got the job done for tonight so we’re good to go.

Six is Enough: A $10,200 event for strictly four-year-old pacers will be Friday’s headliner. While short on quantity (six) it doesn’t lack for competitiveness

Bet down to even-money when he breezed a week ago, the Steve Searle trained Velocity Gator (pp a, Kyle Wilfong) will open as the 5-2 favorite.

Hello Sweetie Boy (pp 6, Todd Warren) is listed next at 3-1. Owned and trained by Kim Roth of Crete, Illinois, the Aracache Hanover gelding couldn’t get out last week after a 1:55 flat triumph in his previous start.