Homepage
You are here: Home1 / Mike Paradise2 / Du Quoin Championships on the Line

It’s Championship Day at the Du Quoin State Fair nestled in the southern tip of Illinois. Rich in tradition and boasting a fast one-mile racing strip on its fairgrounds, ten ICF stake showdowns will be decided this afternoon.

You won’t have to wait long to watch and bet on one of the most anticipated state-bred championships. The first race is the $25,000 initial Director’s Cup division for two-year-old colt and gelding pacers and the cream of the male freshman crop all drew into its grouping.

The second portion of the stake will be the other part of today’s Daily Double.

Here’s how I see today’s 10 championships.

A very well talented and well-matched field. The better trip could decide its winner. Fox Valley Jasper, unbeaten in six starts, has a target on his tail. They’ve taken all kinds of shots at him, but he still hasn’t lost. He does move further outside while beaten Springfield favorite Fox Valley Langley moves in four notches. Illini Jetset has dropped two photos and maybe a well-timed move may see things go his way this time. The inside horses all are capable at a likely fair price if things go their way.

It’s a wide-open affair. The Erv Miller trainees Fox Valley Patriot and Mister Sleaze were used hard early at Springfield and were on empty in the lane. I expect better from them. Fox Valley Steeler has inside speed to be in the thick of it. Fox Valley McKee has prevailed with Kyle Wilfong, who drives tonight. Kage Daniel made a break in his last start and still was a competitive third. His post helps his price.

Fox Valley Kia put on a furious rally at Springfield and won her fifth in a row. She’s shown she’s proficient on or off the pace. Rona Mae had a tough trip and only lost by just one length. My Daddys Revenge had the best close (27 flat) at the Illinois State Fair but had too much ground to try and make-up. She drew better tonight. The Magical Woman may need to be up closer to pull off a victory. With 11 starters, a heady drive will be needed to win it.

The softer of this stake’s two divisions. The outside fillies appear to have the best chance of winning this championship. Fox Valley Candor went off stride at the start at Springfield and made up a lot of ground to get the third-place check. Dawn Of Creation simply didn’t have it at Springfield. She won Hawthorne’s Fox Valley Flan earlier and could shoot out and win this stake as well. Radiant Diamond looks like she’s starting to out it together, although this is a tougher test to pass tonight.

It’s a rematch between Springfield champ Fox Valley Shania (Atlee Bender) and beaten favorite Marvelous Mystery (Kyle Wilfong) who saw her unbeaten streak snapped at eight by the Erv Miller trainee filly, and Fox Valley Shania did it rather decisively by more than two lengths. “Shania” has the pole-position again and that should have her in position to repeat. Marvelous Mystery has the five post this time where Wilfong could carve up a better journey for the filly. The nine-hole in a 10-horse field at Springfield really hurt this Lou’s Legacy offspring A flat mile might see Fox Valley Lisbon get into the gimmicks.

We’ve been treated to some exciting duels between The Kadaba and Springfield champ Goomster (Kyle Wilfong) and Cardinal titleholder Niko Man (Kyle Husted) and we can expect another ding-dong battle today. Both horses drew well. With the 3 and 4 posts. Goomster has shown he can race first up and still come out on top. Nino Man drew better today and might make the top earlier, so he’ll be very tough. Tankmetodennyland has proven he can race with anyone in his division and getting the pole position is a big plus for the youngster. Aint No Mojo is rarely out of the gimmicks.

Lousdobb (Casey Leonard) and Fox Valley Cairo (Kyle Wilfong) have traded state-bred stake victories all season and they figure to battle it out again. The Steve Searle stable’s Lousdobb is back in the grove and won both Springfield races in convincing manners, plus he drew the two-hole today and could go right to the front again. Fox Valley Cairo from the barn of trainer Mike Brink got his desired trip from Kyle Wilfong but was second best both times No big surprise, however, if he avenges that defeat. Romantic Warrior and Good Boy look to be the best of the rest. 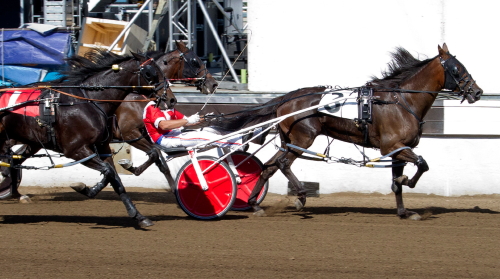 It’s been two racing seasons of close finishes between stakes champions Fox Valley Ozzy and Get E Up and we’ll no doubt watch another spirited battle between these two talented Illinois breds. Fox Valley Ozzy shed his summer-long runner-up role against Get E Up at Springfield with the help of two modest middle quarters given to him by driver Casey Leonard. Get E Up was first over again and couldn’t reel in his main foe. Can he tonight or will “Ozzy” seek and get the front again and hang on? Kingofmyheart is always close but hasn’t beaten his two top rivals yet this year. Either has Fox Valley Crete who is rarely far off. Josie Rocksmyword did win the Cardinal earlier, but his recent form has been a bit off.

Anything is possible but picking against Funky Wiggle may be futile after watching her go off stride at Springfield, fall about 15 lengths behind, but still have the courage to dig in and overtake her rivals for her fifth straight triumph.
The gifted Curt Grummel filly could break again and maybe this time not be a factor like she was in the Violet, however I’m not betting on that happening. Ironclad Creation has been Funky Wiggle’s bridesmaid on a few occasions and could be again, Lous Xanadu comes off a big try at Springfield and the Violet champ is a consideration.

This stake took on a different look when Plum Peachy champion Apple Valley didn’t make the trip to Du Quoin. Rollnroz beat Apple Valley and five other state-bred rivals at Springfield on the front-end and we may find her there again. Violet champ Pattycake Mooss was never in contention at the Illinois State Fair, but she did come home in 26.3. Dandy’s MNM has spent much of the year in Kentucky stakes where she’s had some tough trips recently. The Merv Chupp trainee was a close second in the Violet in her only Illinois start this season. Last year she won Du Quoin’s freshman filly stake, so we know she likes this dirt oval. Stardust Gram has had some very nice efforts since joining the Amy Husted barn.