By Mike Paradise
It didn’t take long on the opening day of racing at the Du Quoin State Fair to produce a stunning upset among its seven ICF stake championships. It came in the $23,000 Directors Award stake for 2-year-old pacing fillies, the first of the “majors” on the 12-race betting card. 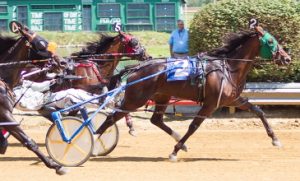 The 17-1 longshot Dee Tumbleweed, winless in her first nine career starts, came flying down the lane with Mississippi native Cornelius Cavett at her lines to prevail for the first time, a 1:55 mile to light up the tote board at $36,40, $22.80 and $12.00..
Cavett got the catch drive behind the Freddie Patton Jr. trainee when Freddie opted to drive Fox Valley Maya, another Ron Phillips and Erica Pechin owned filly in the race who Patton trains.
Cavett, who tuned 29 less than two weeks ago, patiently waited for racing room in the lane with Dee Tumbleweed and when he found it, the Sagebrush filly responded in a big way.
Giftfrommyheart and A Real Doozie finished in a dead-heat for second.
There was no such surprise in the next stake, the $23,000 Shawnee for freshman trotting fillies as Anna’s Lucky Star stayed unbeaten in five career starts for owners and breeder Danny Graham of Salem, Illinois.
Driver Kyle Wilfong got the Nelson Willis trained filly to the top coming out of the first turn and from there the daughter of Cassis showed her heels and her tail to the rest of the field, winning in 1:58.1. Fox Valley Elana (Dale Hiteman) settled for the bridesmaid role, beaten two lengths by the prohibitive 2 to 5 favorite.
The $21,000 Time Dancer for ICF 3-year-old pacing fillies was supposed to be a battle between division leader Char N Marg (Casey Leonard) and Springfield champion Bucklegirl Bobette (Kyle Wilfng) and it was until about midway down the stretch when under the urging of driver Dale Hiteman LK’s Nancy Lee zipped past at odds of 11-1 and captured the stake in a time of 1:55.2, knocking more than four seconds off her previous best time. 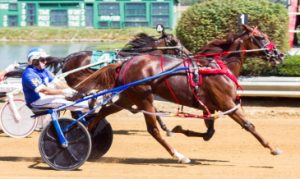 Bucklegirl Bobette and Char N Marg took turns on the front–end, with the former there through the first quarter and the taking the pocket when Char N Marg took over command through the next two quarters,
All the while LK’s Nancy Lee was saving ground, mostly in third, and when Hiteman called on the Joel Smith trained filly, she was ready to roll, coming home in 28.1 for her fourth win of 2016 for Hobart, Indiana owner Lawrence Carp Jr.
If you’re a regular reader to this column you might remember that in Friday’s preview of the opening day card I wrote that the Ray Hanna trained filly Roma Falls was a price shot to consider in the $21,000 Windy Skeeter for 3-year-old trotting fillies.
For those who were at Du Quoin Saturday and did take my advice, they received an $18.40 winning mutuel when the fifth longest shot in the race at 8-1 came roaring down the lane with driver Matt Kruger to win in 1:56.1.
Surviver DI ended up second and Rockinprincessabbie was third.
Roma Falls, can deliver a big late kick when she’s right and the daughter of High Falls certainly was right Saturday afternoon for owners and breeders Mary Lee Jeffers (Mcallen, Texas) and Adele Jeffers Everett of Flat Rock, Illinois. 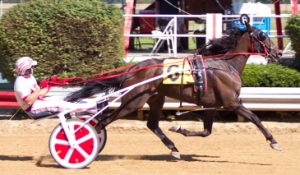 The Mike Roger Stable’s PJ Boy made it a sweep of the State Fair 3-year-old male trot champions when he followed his Springfield win with another in the $21,000 Pronto Don, again driven by Ridge Warren.
Cardinal champion Hail Caesar looked to be in good shape coming down the stretch with Casey Leonard but he went off stride and Speedy Rendezvous, who had the lead at the top of the lane, faded.
“Mike (trainer Rogers) has done a nice job of conditioning this horse and he’s gotten him good at the right time.” said Ridge in the Victory Lame.
A pair of $7,000 ICF Aged Trotting Championships were contested with the first a non-wagering event for colts and gelding. If this had been betting race another’s public’s choice would haven bitten the dust.
Springfield champion Rock Hollywood was expected to also capture the same stake at Du Quoin however Captain Greedy, who went off stride at the first State Fair event, proved best Saturday, pulling away by 2 and 1/2 lengths at the end of his 1:56.4 mile.
Driver Jared Finn was content to race the winning 4-year-old gelding in third in the three-horse field while Rock Hollywood trotted leisurely fractions of 29.4, 29.1 and 28.
When it came down to the stretch drive the John D Finn trainee had more in his tank, drawing away with a 28.4 last quarter for his fourth season win for breeder Charles Doehring and J D who shares ownership of the Yankee Valor trotter.
The Aged Mare Trot also didn’t go as expected either when the favorite Macie Rae broke before the start fell and some 20 lengths back. Even though she rallied to catch the field, she was a tired trotter in the lane.
It was Ants Iner Pants (Kyle Husted) who got an overdue first season win (1:56.1) for trainer Steve Searle of Grant Park, Illinois who shares ownership of their home-bred 7-year-old mare with fellow Michigander Tom Wisniewski.
Ants Iner Pants went into the race with a career bankroll of $238,878 but was winless in her first dozen outings this season.
“She had a little bloodwork problem and she’s seven now but she always goes out and gives you all she’s got,” said Searle in Victory Lane.
Final Card: Du Quoin’s two-day racing meet concludes Sunday afternoon. First post is 12 noon.
http://harnessillinois.com/wp-content/uploads/2021/03/ihha_logo_white_wtext_v2-300x130.png 0 0 Mike Paradise http://harnessillinois.com/wp-content/uploads/2021/03/ihha_logo_white_wtext_v2-300x130.png Mike Paradise2016-08-28 13:00:502016-08-28 13:04:06Du Quoin Favorites Take a Tumble