Harness racing returns Tuesday afternoon to the Du Quoin State Fair for a two-day meet with six significant ICF stake championships on the line, three for both freshman and sophomore horses on the first day of racing.

The eleven race betting card starts at 12 noon with two non-wagering events getting things going at 11:30 am.

Harness racing at Du Quoin is rich in tradition and for six decades just about every top-notch 3-year-old trotter made the trip to southern Illinois to compete on the one mile track. 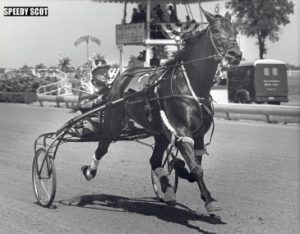 From 1957 through 1980 the Du Quoin State Fair was the home of the prestigious Hambletonian and its Victory Lane was graced by such past star trotters as Speedy Scot, Nevele Pride, Lindy’s Pride, Speedy Crown, Super Bowl, Bonefish, Green Speed and Burgomeister, its last Hambo champion.

When the Hambletonian Society decided to shift the “Kentucky Derby of Harness Racing” from its quiet rural setting in downstate Illinois to the Meadowlands and its big city lights of the New Jersey-New York area starting in 1981, the Illinois harness racing community and the Illinois Department of Agriculture stepped up and replaced it with the World Trotting Derby, again attracting the nation’s very best sophomore trotters to Du Quoin which continued to be one of the major stops of the nationally prominent Grand Circuit.

Without any interruption the crème de la crème of the 3-year-old division continued to ship to Illinois with the lure of a $500,000 pot and a $100,000-plus purse for the filly division of the World Trotting Derby. 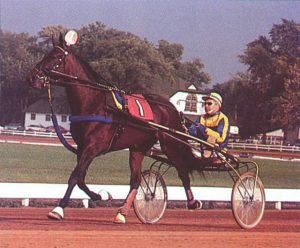 Unfortunately, in 2010 the Illinois Department of Agriculture announced the World Trotting Derby would become a casualty of a (surprise) Illinois’ budget crisis. The Du Quoin meet was cut from five days to three (and later to two) and the Filly World Trotting Derby and the Grand Circuit races — all of which lured prominent horses nationally as well — also were on the state’s hit list.

The Du Quoin State Fair meet still remains a vital part of the ICF stakes harness racing program, where a championship is a feather in the cap for any Illinois horsemen and their owners.

Four of five Illinois State Fair Colt Stakes titleholders will look to add a Du Quoin championship on their list of accomplishments Tuesday. The lone exception is in the $31,000 Director Awards stake for ICF 2-year-old fillies where The New Americana and Fox Valley Jazzy, the one-two Springfield finishers, are staying home.

The Springfield morning line has Rollin Coal at low-end odds of 3 to 5 while Lex Two opens at 7-1.

The anticipated duel in the Shawnee stake between the two ICF freshman trotting filly leaders, Maui Mama and Good Design won’t come to fruition. With 13 entries, the stake was split with Good Design (9-5, Kyle Wilfong), going in the sixth race – first division and Maui Mama (programmed at 1-1, Mike Brink), winner of 4 of her first 5 races including the Springfield title, in the seventh race second split.

The Wilfong family’s Boogie On Down (5-2, Kyle Wilfong), carries a four race winning streak, all on the front-end, into the $27,000 Time Dancer for ICF 3-year-old pacing fillies. The Springfield champ has seven foes in the eighth race, including the second through fourth place finishers—Fox Valley Charliz (6-1, Jamaica Patton), Fancy Creek Jolene (4-1, Tim Curtin) and A Real Doozie (3-1, Mike Oosting)—in that order. 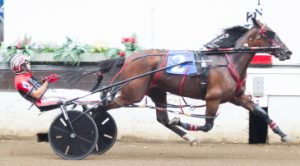 The 26-year-old Wilfong will also be behind the likely prohibitive favorite Annas Luck Star (pp 2), in the ninth race $27,000 Windy Skeeter. She’ll open at odds of 8-5. The Danny Graham home-bred filly was 6-for-6 as a freshman in her division and is unbeaten against other fillies thus far this season as well, with victories in Hawthorne’s Beulah Dygert and Violet stakes and at Springfield. The filly’s only two losses came “against the boys” in open company trots.

The $27,000 Pronto Don for ICF sophomore trotting colts and geldings may be the most attention-grabbing championship on the card. The Flacco Family Farm’s homebred Louscipher (5-2, Mike Oosting), is atop the division with over $58,000 banked and eight trips to a winner’s circle including a visit to Springfield’s 13 days ago. The Roshun Trigg trainee also owns a pair of stake wins in Hawthorne’s Erwin F. Dygert.

However, Louscipher was upended by Muscle Image (pp 9, Mike Brink), in the Cardinal Final and was third to Picky Picky Valor in the August 12th prep race for the Springfield championship.

Picky Picky Valor (7-2, Brian Carpenter), definitely has picked things up for trainer Gerald Hansen over the last two months, nevertheless, he has made breaks in each of his last two stake finals.

Picky Picky Valor won the Cardinal prep but went off-stride in the early going in that final. The gelding then breezed on the front-end in a prep at Springfield, only to break at the start in that championship. Picky Picky Valor did come from eight or so lengths behind to overtake the field, but his 26.4 last quarter wasn’t enough to hold off a faster closing Louscipher, who trotted his final panel in 26.3

The consistent Trixie’s Jethro (9-2, Jared Finn), third or better in 10 of 13 season starts, also figures to be a major contender today and you might want to take a look at the rail horse, Bands Houdini (6-1, pp 1, Kyle Husted), as well.

The Steve Searle trained trotter started off the season on top of the division before a series of setbacks that saw some disappointing finishes. Bands Houdini was put on Lasix at Springfield and trotted home in 27 flat in each of her two starts there.