Sunday night’s round two of the Night of Champions series for ICF 2-year-old trotters of both sexes brings about an interesting first-time match-up in the second Kadabra stake division for colts and geldings.

First leg winners Fox Valley Picaso and Trixie’s Turbo will meet for the initial occasion in the third race and a victory by one or the other would vault the winner into the early favorite role for September’s Kadabra Final on Hawthorne’s showcase night of their meeting. 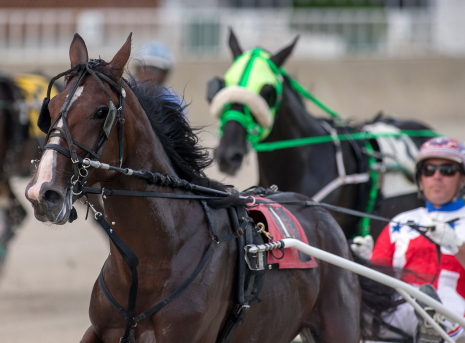 Fox Valley Pisaco (Casey Leonard) was hammered down to odds of 1 to 5 and 1 to 9 when she captured the $59,900 Cardinal and his first leg of the Kadabra and in both races, it was strictly no contest. The Herman Wheeler trained colt won the Cardinal by 4 and 1 /2 lengths (2:01.1) and his Kadabra by almost four lengths and was well in hand both times.

Trixie’s Turbo (Jared Finn) is trained by Heather Stell and is from a family of successful ICF trotters. He’s the fifth foal of owner and breeder Charles Doehring (Brownstown, IL) broodmare Tropical Trixie. Her first was the Yankee Valor colt Captain Greedy, a 23-time career winner with a mark of 1:554.4 and over $190,000 in earnings.

Tropical Trixie’s second is Trixie’s Jethro (1:56) , currently campaigning at Northfield Park, and her third Sunny Sasha was a 1:57.4 winner at Hawthorne. Next came Trixie’s Turbo and all are from the ICF sire Cassis.

Encantado debuted with a front-end triumph (1:59.2) in a division of the $30,050 Violet and followed with a 2:01.2 victory in her opening leg of the Fox Valley Flan, both with Kyle Husted in the bike. Casey Leonard steers the Lou’s Legacy filly for the first time tonight.

E L Game On followed her bridesmaid role in a Violet division with a come-from-behind victory in a first leg of the Fox Valley Flan in 2:01 flat. The well-traveled Loussolataire was third in her “Flan” start, beaten only one length by Encantado on June 25 and has made five starts at five different County Fair tracks since. Tonight will be the filly’s 15th time she’ll head to the gate in her first season as she goes after her ninth season win. 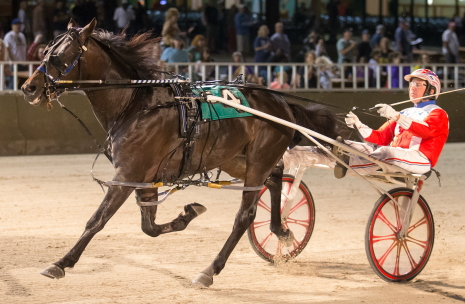 Twice as Nice: Casey Leonard steered both Ken Rucker trained ICF 2-year-old colts The Bucket ($3.40) and Maximus ($4.60) to their victories in Saturday’s two $12,500 divisions of the Incredible Finale stake series.

The Bucket came out of third in the lane, looked the front stepping Meyer On Ice (Kyle Husted) in the eye near mid-stretch and then drew off when the latter went off stride. The Bucket covered the mile in 1:57.2 and ended up almost seven lengths of the second place horse Coming Up (Ride Warren). Meyer On Ice regained stride to be third.

Leonard had Maximus in sixth, ahead of only one horse through much of the second division. The 1:57.2 winner was 9 and 1/2 lengths behind the leader Fox Valley Julius (Kyle Wilfong) with a quarter of a mile to go when Maximus rallied past in his second career start. Viola (Ryan Anderson) came on well to be second beaten three quarters of a length. Fox Valley Julius was third best.