Homepage
You are here: Home1 / Mike Paradise2 / Eight Springfield Championships on the Line

The 2019 Illinois State Fair harness meet at Springfield comes to a close this afternoon, but not before eight ISFCS champions are crowned.

The Illinois State Fair Colt Stake finals for ICF two and three-year-olds of both sexes and gaits are the last eight events on a 12-race card. Each freshman championship has a $32,500 pot on the line, while the sophomore showdowns go for $31,500 apiece. First post is 12 noon.

Lous Abigail has lost only once in six career starts and that was to the Mike Brink stable’s Celone Hall in their July 14th Fox Valley Flan match-up. Since then Lous Abigial has turned the tables on Celone Hall (pp 5, Brandon Bates), the last two races they’ve met. 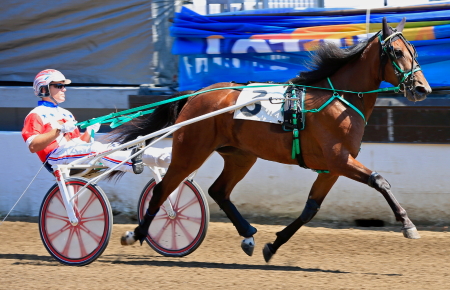 The two-year-old filly pace follows and division leader Double Parked(Travis Seekman), will have to start in the second tier with the 10-post. She’s been hammered down in the wagering in every start and has rewarded her backers in five of those races for trainer and owner Leroy Hunt of Jackson, MS.

Sign Her Up (pp 4, Juan Franco), was a surprise winner at 10-1 in her elimination. Tropical Fruit (pp 6, Brandon Bates), went off stride early in her first start and made make up five lengths on the field to finish second last weekend.

The draw couldn’t have gone any poorer for the 2-year-old colt and gelding pace pre-stake favorite Fox Valley Ren (Kyle Wilfong), with the outside nine post.

The Nelson Willis trainee has shown she can sprint out in a hurry from the starting gate and likely will this afternoon, seeking her sixth consecutive triumph for the Megan Rogers Racing Stable of Chicago.

Chick Magnet, Ryans Ambassador, KB Two, Hello Rooster, Patton Plus, and Western Perch all are looking to pull off a surprise victory today. 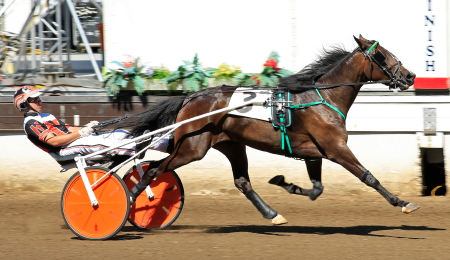 The ninth race 3-year-old filly trot appears to be, at least on paper, a slugfest from last year’s freshman champion filly Louzotic (pp 3, Kyle Husted), trained by Steve Searle, and Heidi High (pp 2, Juan Franco). If you’re keeping score its 3 to 2 in favor of Louzotic in their last five meetings.

Heidi High’s shift from the seven slot to today’s two post is very significant. The New Balance filly is at her best on/or close to the front and wasn’t there last week. She will be this afternoon.

The three-year-old colt and gelding trot is pretty much up for grabs. You can make a case for a number of these ICF sophomores: Lousraptor (pp 5, Casey Leonard), who took last week’s prep from the 10-hole. Lourhianon won the most recent leg of the Erwin F. Dygert stake series, his fifth triumph of the year. Trixie’s Turbo (pp 1, Kyle Wilfong), who made a break last week, but was never headed against most of these same trotters in her early June Cardinal stake victory and Louscardamon who is a Dygert leg victor and plenty dangerous with a flat mile.

A likely brisk pace could set things up for the capable Jay Garrels late charger Perch (pp 8, Kyle Wilfong), who has 9 career wins in 21 tries and almost $80,000 on her card.

The Springfield finale is the often called “glamour division” of horse racing, a 3-year-old colt and gelding championship. In this case it’s for ICF male pacers.

Maximus (pp 2, Kyle Wilfong), while under a hold, won for fun in 1:54.4 last weekend. Freshman champ Meyer On Fire (pp 5, Kyle Husted), uncorked a 26.2 last quarter in his 1:53 elimination victory, while Fox Valley Triton, was raced easy before, exploded with a 26.1 final panel against the above to be second.