Nevertheless the outcome of the ICF two-year-old filly pace didn’t go as expected. In fact the 4-5 favorite Connie On The Go (Ridge Warren) who came into the event with a five race winning streak, ended up tenth and last and obviously wasn’t herself as she stopped in the lane and was distanced.

Instead it was Princess Moose ($9.80) who proved best with Kyle Wilfong in the sulky. The Gary Rath trained filly had been the bridesmaid in three state-bred takes at the meeting but Saturday she stepped up and got the job done for Berwyn, Illinois owner Al Beals.

Wilfong took Princess Moose out of fifth on the backside on the $31,000 yearling buy and the freshman filly swooped to the front and went on to pace a 1:57.2 mile, one and one-half lengths better than runner-up Pure Sin in event six of a king-size 16 race program.

The “chalk” brigade continued when Lous Abigail breezed in her sophomore filly trot division where the two-time Beulah Dygert series winner Fox Valley Extacy failed to make next week’s division final. The 7-5 second choice started running in the last turn after leading through the first half mile, and eventually finished sixth.

As expected Allbeastnobeauty ($3,20) and Skeeter Machine ($2.80) captured their respective aged mare divisions before Reign And Shine (Casey Leonard) put an end to Saturday’s “chalk” parade when she popped at 9-1 in the second sophomore filly trot split. It was Reign And Shine ($20.20) first career win and it came in the home-bred’s 16th lifetime outing for Williamsville, Illinois trainer Carroll Hays. 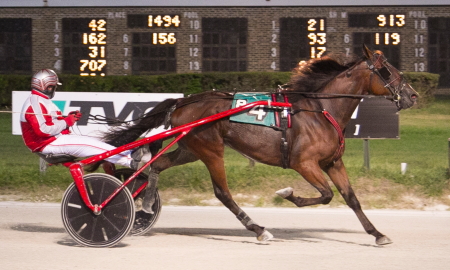 Ideal Situation: On Friday night the ICF male pacers and trotters were showcased and when the dust settled there were also only a couple of surprising outcomes.

Casey put the $19,000 yearling purchase on the front at the half, reached in a modest time of 59.3 and Ideal Big Guy held off the fast-closing Frontier Charley by a half-length for the Illinois foursome of Dandy Farms Racing (Glenview), OB Stables (Shorewood), Peter Kouchis (Palos Hills) and conditioner Terry Leonard (Harvard).

Sitting Pretty: The Nicole Agosti trained Western Perch (Kyle Wilfong), sent off at 11-1, got the jump on He’zzz A Wise Sky (Bobby Smolin) and beat the heavy 3-5 favorite by a half-length with a lifetime best mile of 1:53.2 for owners Doug Bowen, Alan Bowen and Troy Markert, all of Mt Sterling, Illinois.

Western Perch ($24.80) received an first-rate pocket trip from Wilfong who had the Duneside Perch sophomore in second behind the front-stepping RG’S Tracer at the half (57.2) while He’zzz A Wise Sky was seventh, six and one-half lengths behind the eventual winner.

No Contest: The largest victory margin Friday night belonged to Bobalou in a freshman trot division. Driven by his trainer Curt Grummel, the home-bred ended up eight and one-half lengths ahead of the second place trotter Shady Maple Spirit. The 2:03.1 triumph was Bobalou’s fourth in a row for owner and breeder Dr. Patrick Graham of Pittsfield, Illinois.