This year’s Cardinal and Violet championship contest for ICF pacers or trotters wraps up Sunday evening at Hawthorne with a pair of 3-year-old trotting stake events.

In both cases, there is an early prohibitive favorite.

The morning line lists the Roshun Trigg Stable’s Louscipher at 3-2 odds in the third race $17,800 Cardinal Trot Final after he drew the two-slot in the eight-horse field.

The meet’s leading driver Casey Leonard will handle the Flacco Family Farms home-bred for the second time this season. Casey drove Louscipher to his 1:56.4 career fastest mile in the second leg of the Erwin F. Dygert stake series earlier this month when the son of Lou’s Legacy was hammered down to 10 cents on the dollar.

Danny Graham’s homebred filly Anna’s Lucky Star will open up at even lower odds in the fifth race $20,000 Violet showdown. Her first flash odds will be at even-money. The Nelson Willis trainee missed last week’s Violet prep when she was scratched sick.

Winning races has been a habit for Anna’s Lucky Star. The daughter of Cassis has gone postward in 10 career starts and visited a winner’s circle afterwards eight times. She was second the only two starts she didn’t win and both of them came this year in open company races against colts and geldings. 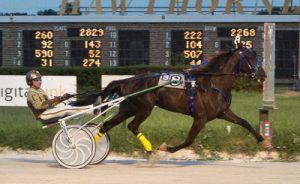 The Steve Searle Stable’s Daisy Lou Duke, a solid 1:59.1 winner a week ago in the Violet Prep, is the likely second betting choice despite landing the outside nine-slot. The filly does have gate speed and she won from the same outside post back in early June in the first leg of the Beulah Dygert stake series.

Picky Picky Valor was a front-end winner in 1:56.4 last week in the Cardinal Prep for Monee, Illinois owner Shelley Steele and beat Louscipher in that race.

However, you can go to the bank that Picky Picky Valor won’t be the post time favorite. Despite his continuing improvement the Yankee Valor gelding gets my vote as the “Rodney Dangerfield” of this ICF division.

In other words, the trotter gets no respect from the betting public.

Picky Picky Valor has never gone off as the favorite in any of his 10 starts as a 3-year-old. In fact the average odds on the trotter this year when the starting gate springs open is 21-1. In his three starts in two ICF stakes and last Sunday’s Cardinal Prep win he’s gone off at 25-1, 53-1 and 10-1.

Yet Picky Picky Valor hasn’t missed a purse check as a 3-year-old in his eight starts at Hawthorne and has a pair of seconds and a third to go along with his two season wins with his first coming in a Late Closer Series leg earlier in the meeting. 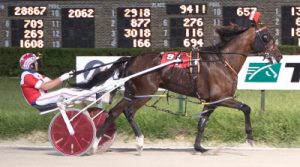 Easy Does It: Casey Leonard put Fox Valley Nemitz ($5.00) on the front-end and the Nick Giberson trained gelding coasted to a three-length victory in last night’s $27,400 Cardinal Final for ICF 3-year-old pacing colts and geldings.

The first five finishers in the Jackpot Pick Five race were Powerful Pulse, Sweet Donna’s Girl, Naty, Backwood’s Barbie and Back Stock. There was a guaranteed pool of $500,000 and a mandatory payout on the 20 cent wager.