Homepage
You are here: Home1 / Mike Paradise2 / First Day at Du Quoin Had Its Surprises

You knew it was going to be an interesting opening day of racing at the Du Quoin State Fair, when the first of a series of major stake races on the program saw the 19-1 longshot Party Belle flash across the finish wire first in the $31,000 Director’s Award stake.

The ICF 2-year-old pacing filly stake was expected to be between Violet champion Rollin Coal and Incredible Tillie stake series winner Lex Two. However, those two betting favorites had to take a back seat to the Shawn Nessa Stable’s, Party Belle, who went off at 19-1 odds and rewarded her backers with a $41.50 mutuel. 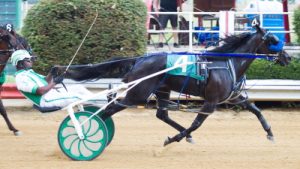 Driver Jamaica Patton weaved his way through traffic at the top of the lane and the Party At Artsplace daughter responded with a 1:56 winning mile for owners Bryan Brown of Bolton, Mississippi and Ladevie Spann of Anderson, Indiana. Party Belle had been 1 for 8 in her career starts with her lone previous win a 2:01.4 mile on the Anna fair track.

The $31,000 Shawnee for 2-year-old trotting fillies wasn’t decided until several minutes after the race was finished and in it, the 2-1 favorite Good Design, made a break coming out of the last turn, eliminating herself.

Trotting Grace crossed the finish line first in the 1:56.3 mile, but was disqualified to fifth, when she ran into the sulky of Lous Silver Star and flattened a tire.  Fox Valley Winnie (Ridge Warren), at 8-1 was awarded the victory for trainer Curt Grummel and Carrolton, Illinois owners Craig Grummel and Chili Day Stables.

E L Miss Kaibra was moved up to second and Lous Silver Star was advanced to third when the third place finisher Powerful Temtrist was disqualified for failing to lose ground on a break. 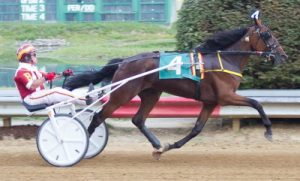 The chalk players could finally breathe a sigh of relief when the second division of the $31,000 Shawnee was in the history books, when the heavy 1 to 2 favorite Maui Mama ($3.00) came on with a rush in the lane with trainer Mike Brink at her lines in 1:56.4 for her fifth win in six starts for owner Bill Wright of Morton, Illinois.

Sent off at even-money odds Fancy Creek Jolene ($4.00) was a convincing winner of the $27,000 Time Dancer stake for 3-year-old fillies with her new driver Tim Curtin, who made what turned out to be the winning move with the Kim Hamilton trainee at the half-mile pole reached in :56.4. 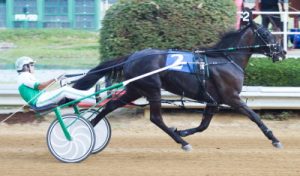 Fancy Creek Jolene came out of third for Curtin and raced outside of the pace-setting Springfield champion, Boogie On Down, through the third quarter. The Sportsmaster filly then quickly accelerated in the lane and pulled away by three lengths for South Chicago Heights, Illinois owner Frank Marcolini.

Boogie On Down held on for second while third went to San Antonio Rose.

Annas Lucky Star (Kyle Wilfong) continued her domination of the ICF 3-year-old filly trotting division, with a victory in the $27,000 Windy Skeeter for her owner and breeder Danny Graham.

Lous Credit Report finished by three-quarters of a length behind in the 1:55.1 mile, while Daisy Lou Duke settled for third. Annas Lucky Star has now won six in a row and has never lost a race to another filly in 15 career starts.

The 4-5 favorite Louscipher (Mike Oosting), passed the front-stepping Picky Picky Valor in the deep stretch and added the $27,000 Pronto Don Trot to his list of accomplishments as a 3-year-old for trainer Roshun Trigg. Owned and bred by Flacco Family Farms of Alexis, Illinois, the gelding also won the Springfield championship and earlier took two legs of Hawthorne’s Kadabra stake series.

Picky Picky Valor (Brian Carpenter), had opened about a seven length lead, after taking command on the backstretch. He took the field to a 56.4 first half and a 1:25.3 three-quarters before weakening in the late going.

Driven by his trainer Freddie Patton Jr., Primed N Powerful ($2.80), followed his Springfield title with an easy wire-to-wire 1:55 win in the $8,000 ICF Aged Trot for horses and geldings. The 4-year-old gelding is owned by Ron Phillips of Athens, Illinois and Sharry Boledovich of Lakewood, Colorado.

Tuesday’s opening day card started off with the Mike Brink trained and driven Real Peace, taking the first of three Topline stakes, this one for 2-year-old pacers, in 1:54.4.

The Brink Stable’s Tookadiveoffdipper (Mike Oosting), fresh off a triumph in last week’s Open II Pace at Hawthorne, cruised with a 1:52.4 mile in a Topline for 3-year-old and upward pacers. Brian Cotton then rallied Fort Defiant past the 2 to 5 favorite Macie Rae, to notch the Topline for 3 and up trotters in 1:57 for the Phil Cotton Stable.

The $7,500 County Fair Challenge for 3-year-old ICF filly pacers came next with Watchcircuspace (Tim Curtin), surprising at a $20.20 mutuel for trainer Mike Rogers, beating the overwhelming 1 to 9 favorite Prettyfaceuglyways.

Ending with a Bang: A pair of stake showdowns for aged ICF horses and a trio of prominent state bred championships for 2 and 3-year-olds make-up the back-end of the 12-race closing day card today (Wednesday) at the Du Quoin State Fair.

The $33,000 Darn Safe for ICF 2-year-old trotting colts and geldings gives us the anticipated matchup that didn’t happen at Springfield between division leader True Detective, trained by Curt Grummel, and the fast improving Vic’s Pizza, from the barn of Mike Brink.

Vic’s Pizza, programmed at 2-1, landed inside post (the two), for the Dudley Hanover but the draw wasn’t as kind to True Detective. The 3-1 morning line second choice drew the outside nine-slot for his new driver Kyle Wilfong. True Detectives’s regular driver Casey Leonard skipped the Du Quoin State Fair.

The late-blooming Illinimight (8-1, Mike Brink), who was second at Springfield to his stable-mate Vic’s Pizza, also figures to make his presence felt from the rail and the same can be said of Cruzen Cassi (4-1, Jaren Finn), a three-time winner as a freshman for trainer John D Finn.

With 13 ICF freshman male pacers entered, the Governor’s Cup was split into two $16,500 events and with the unbeaten division leader Fox Valley Gemini not making the trip to Du Quoin, both appear to be wide-open.

Bootleg Island (Kyle Husted), a four-time season winner, and Backstreet Lawyer (Mike Oosting), who flew home in 26.3 in the Springfield final, are listed in the morning line at 6-5 and 8-5, respectively. Both youngsters are from the Tom Simmons Stable. They’ll be tested by Thebestmanicanbe (10-1), Al’s Briefs (7-1), Fox Valley Hipster (15-1), and Not Me Gram (12-1).

The $29,000 Dudley Hanover for state-bred pacing colts and geldings will wrap up this year’s Du Quoin racing meet and will out all the top finishers in the Springfield finale that saw the Jim Horvath Stable’s Captain Rhett (Kyle Husted), stun the crowd with a quick 1:49.4 winning mile. Despite the sub 1:50 mile performance, Captain Rhett is the 9-2 third programmed choice.