This week’s focal point of ICF pacers and trotters competing at Hawthorne will be fixed on the state-bred two-year-old divisions.

Its round two in all four stake divisions for Illinois bred freshman as they continue their march towards what their trainers and owners hope will be a starting berth in a lucrative $130,000 (est.) final on Hawthorne’s Night of Champions in late September.

To be a finalist on Hawthorne’s version of Super Night a pacer or trotter in their respective stake series outings has to perform well enough to be among the 10 highest point earners after four legs of their particular series.

Those points are earned on a 50-25-12-8 and 5 basis (first through fifth finishes) with a single point given for starting and not earning a check for fifth place or higher.

First up in this week’s ICF 2-year-old stake competition is Friday’s Incredible Tillie for juvenile pacing fillies. The Incredible Finale divisions for their male counterparts will head-up Saturday’s program while Sunday we’ll see both the Fox Valley Flan events for first season trotting fillies and the Kadabra competitions for freshman colt and gelding trotters. 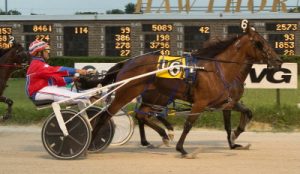 Gary Rath’s Shelby Rae has shown she could be a force in the ICF freshman filly pacing division. (Four Footed Photo).

With 25 points are the second place fillies Sheincrediblenasty and Shelby Rae, who served notice last weekend she’ll very likely be a force as the freshman stake series moves along.

Shelby Rae, a daughter of Duneside Perch out of the Artsplace mare Mystical Art, was the bridesmaid in her first three career starts before a fourth place finish in the Violet Final after a failed first over bid. She’s owned by Gary and his wife Kathryn of Marengo, Illinois.

Second Division Loaded: The draw is out for Friday’s $12,000 Incredible Tillie events and the eighth race second split is particularly tough. All of the current leaders in the ICF freshman class landed in the eighth race split.

Trixie’s Jethro was a comfortable first leg winner of the Erwin S. Dygert stake series back in early June however Louscipher took the second leg in fairly easy fashion a month later. Picky Picky Valor coasted on the front-end in the recent Cardinal prep but went off stride when freshman rival Muscle Image powered past and pulled away to his first season win (1:58.1) a few nights ago in the championship.

The third round of Hawthorne’s Erwin S. Dygert stake series is 10 nights down the line on Sunday July 30

See You Later: Bernie and Deb Paul’s productive 7-year-old mare Seeyouatthefinish, a winner of 11races in both 2015 and 2016, mostly in either Opens or high level conditioned paces, is back in Pennsylvania where she competed for the first four months of this year.

“I just couldn’t get her started enough at Hawthorne,” said Bernie. “I can’t make any money with her sitting in a barn so we shipped her back to The Meadows along with Laurel’s Lea and Secret Servas.”

Seeyouatthefinish had a trio of second place finishes in three Open filly and mare events at Hawthorne in May but was idle after getting a fifth place check in the June 17 Open. The mare made over $80,000 last year and owns 36 lifetime wins in five seasons of racing.