I’ve been covering our sport for more years than I probably like to admit (45) and until last year I never saw the words “Guatemala” and “Harness Racing” in the same sentence.

That all changed when Juan Franco came along to drive in Illinois with the start of the 2016 meeting at Hawthorne.

The now 40-year-old Franco is a native of the Republic of Guatemala, a Central America country bordered by Mexico and Belize to its Northwest, Honduras to its East, El Salvador to its South with the Caribbean to one side and the Pacific Ocean on the other.

Modern Guatemala once formed the core of the Mayan civilization conquered by the Spanish in the 16th Century. Now a days the country’s main exports are fruits, vegetables, flowers, handicrafts, and cloths.

Tourism, much of it coming via cruise ships, has become one of the main drivers of the country’s economy with its popular archaeological sites, pre-Hispanic cities, and beautiful beaches.

Not because of its horse racing tracks. There aren’t any.

“They have riding horses in my native country, but no horse racing,” said Franco who came to the United States about “21 years ago.”

The obvious question to Juan was, who or what steered him to the harness racing industry and eventually becoming a driver?

“It was Donny Freese,” he answered. “I went to work for Donny soon after I came here. I started out cleaning stalls for him. He saw I was hard worker who showed up every day, so he began teaching me things around the horses. Donny gave me two horses to groom. After that he taught me how to jog horses and then how to train them. I worked for him for a long time.”

“Then I went to work for Homer Hochstetler. He’s a very nice man and an excellent trainer. I learned a lot from Homer, too.  Now I’ve been with Nelson Willis, a real great guy. In the last 20 years I’ve worked for only those three people. Nelson is the one who gave me a lot of my chances to drive early on.”

Like most inexperienced newcomers to a driver colony, Juan learned bringing home a winning horse when you’re almost exclusively at the lines of longshots, can be an arduous task. 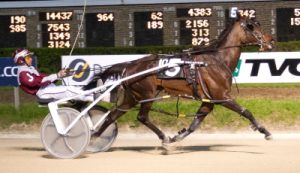 While Juan did get his first pari-mutuel victory in his tenth professional drive with the pacing mare Parklane Dragon for trainer Nelson Willis at 25-1 odds, Franco would make only four more visits to the Hawthorne winner’s circle in the 2016 summer meeting in his next 136 drives.

Nevertheless, Juan gained valuable driving experience in his first season and got to know more horsemen and they in turn got to know the hard-working Franco better and it showed in this year’s Hawthorne summer meet.

Franco’s win total jumped to 28 with 44 seconds and 61 thirds, while his drives shot up with 200 more opportunities. Horses he drove earned over $300,000, six times greater than in his first season as a driver.

“I had a very good, very good meeting this summer at Hawthorne,” said Franco.

“Winning those stakes has been my biggest thrill as a driver so far,” continued Juan. “I love what I’m doing and I’m thankful to the trainers who have given me a chance to drive their horses.”

Juan is living his American dream and most likely enjoys one distinction over other drivers.

Franco has got to be the leading driver in the United States from Guatemala, since I don’t know of any another from his native country doing what he’s doing.

“I’m a very happy man and I love this country,” was Franco’s reply.

Good luck to Juan when the Hawthorne winter harness racing meet gets under way on January 5th.

Shelley’s Right Pick Paid Off Did You Know That . . .
Scroll to top