The first added money finals of the season for ICF 2-year-old pacers will be contested Saturday night at Hawthorne when a pair of 10-horse fields of freshman goes postward in the Cardinal and Violet Championships.

First up is the $29,800 Cardinal Final and if you go by the numbers, you might like the chances of a Tom Simmons trained youngster making a visit to the Hawthorne winner’s circle.

When the Simmons Stable’s Bootleg Island, one of the three fourth place finishers in the Cardinal eliminations, drew into the sixth race co-feature it gave the Springfield based conditioned his fourth starter in the stake.

Backstreet Lawyer lacked racing room and had to settle for third in his elim while stable-mate Bootleg Island was badly impeded by a breaking horse and ended-up fourth as the public’s choice.

Mike Oosting had his choice of the four Simmons youngsters to drive and selected Backstreet Lawyer. Mike Rogers got the catch-drive behind Bootleg Island, Kyle Wilfong took over the lines of Beach Shootingstar and Matt Krueger became the third different driver behind Mykonos in as many starts. 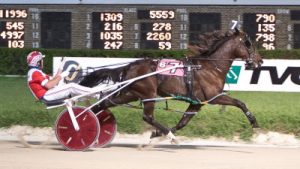 Numbers aside, the post-time favorite will likely be Fox Valley Gemini (Casey Leonard) from the Terry Leonard Stable. Owned by Jim Ballinger of Atwater, Illinois, the Yankee Skyscaper gelding zipped past his first two fields and won each in comfortable fashion.

Dane May’s Dandy Dune and Cornelius Cavett’s Thebestmanicanbe both came on nicely in the lane and grabbed narrow elimination victories in their initial starts on Hawthorne’s mile track.

Down to Ten: The starting 10-horse field in next Friday’s 3-year-old Violet $27,200 Championship were determined after a pair of last night’s elimination races.

The Donna Holt Stable’s Filly Forty ($4.60) led the way in the first $6,000 division with a convincing two-plus length victory in 1:54.4 for driver Jamaica Patton.. The daughter of Duneside Perch brushed past in the lane with a quick 26.4 last panel for Culver City, California owners A Piece Of The Action.

Fancy Creek Jolene (Matt Avenatti) came a long way to be second best, while Dandy’s Dududidudu took third. Also gaining the final from the second race split were Razzleme Dazzleme and Boogie On Down. 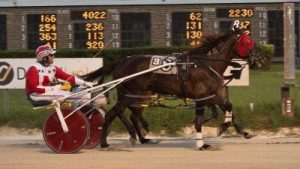 Friday’s second 3-year-old Cardinal pace elimination was so close that you can barely tell A Real Dozzie is inside of the winner Lady’s Party (Casey Leonard) at the finish in this Four Footed Photo.

The second Violet elimination saw Lady’s Party (Casey Leonard) and A Real Doozie (Mike Oosting) battle it out down to the wire with Lady’s Party prevailing by slim nose in a career best time of 1:53.1.

My Kind Of Dance, Princess Sage and Hope Hotspur, the third through fifth place finishers, also advanced to next weekend’s Violet showdown.

Lady Party’s win was her fifth in eight season starts for Charleston, Illinois owners Mitch Titus and Dennis Wright and the Party At Artsplace filly’s first since racing out of the barn of trainer Terry Leonard.

Last to First: Mystical Walter flew down the lane with a 26.1 last quarter and gained a one-length victory in the $9,000 ninth race continued race. Caffeine Kid closed strong for second while Sunset Dreamer was third best.

The 7-year-old ICF pacer Mystical Walter was tenth, some 10 behind at the three-quarter pole before powering past to give Casey Leonard a driving triple on the card. Mike Oosting also had a three-bagger last night while Bobby Smolin had a driving double.