A number of ICF freshman pacers and trotters last Saturday and Sunday showed they could be major players in the second legs of Hawthorne’s Night of Champions stake series that get under way this weekend. 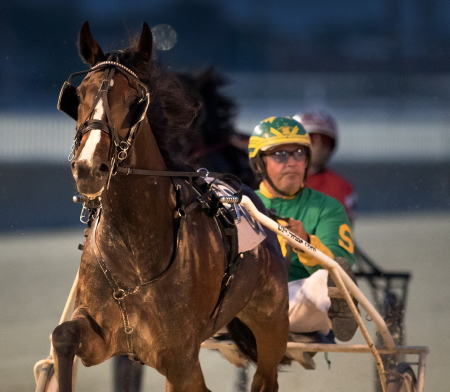 Louzotic is shown here with driver-trainer Steve Searle, on her way last Saturday to a victory in a prep race for this week’s second leg of the Fox Valley Flan stake series for ICF freshman trotting fillies. (Four Footed Fotos)

On the same Saturday card Foolishlittlegirl (Kyle Wilfong), another Incredible Tillie aspirant bounced back from her fifth place finish in leg one of the 2-year-old filly pace, with a convincing 1:57.4 mile for trainer Jim Eaton. The Richest Hanover filly was a second place finisher, when she debuted in a division of the Violet.

On Sunday The Bucket (Casey Leonard), was well in hand at the finish of his 1:57.2 mile, powering past Incredible Finale first leg series victor Frontier Muffler and drawing off. The Ken Rucker trainee was an easy winner in his Cardinal division (1:57.1), in mid-June, but some traffic problems put him out of position to contend in his Incredible Finale leg as the even money choice.

One race later Sunday the ICF 2-year-old trotter Trixie’s Turbo (Jared Finn), made it two-for-two to start off his career for trainer Heather Stell Finn. The younger brother of former Illinois trotting champion Captain Greedy followed his winning debut in a first leg of the Kadabra, with a two-plus length triumph Sunday in 2:02.2, trotting the last half in 59.3.

A prep race for the second leg of the Fox Valley Flan for Illinois bred trotting juvenile fillies saw the Steve Searle stale’s Louzotic come on with a rush and overtake both first series leg champion E L Game On and Violet victor Heidi High. 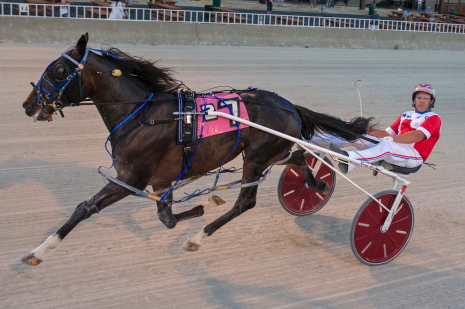 Louzotic, owned by Flacco Family Farms of Alexis, Illinois, was almost 18 lengths behind in eighth and last at the 31.1 first quarter. She was still seventh, trailing by seven and one-half lengths when Heidi High reached the half-mile pole in 1:02.4.

Searle was content to wait for the stretch drive, to ask his Lous Legacy filly for another gear and when he did, she responded in a big way, coming home in a snappy 27.2 in her winning 2:02.1 mile, almost one length the best.

“She’s a special filly,” said Searle. “When I got home I watched the replay of her race and even though I knew she won, it still looked like she was too far behind to get up in time. I’ve brought her along slowly just like I do with all my young horses. I don’t want to race them hard early on. I want them good in August and September when the better money is on the line. “

Louzotic made her debut in a June 17th division of the Violet and was a non- threatening fifth. Eleven days later, the filly came from almost 10 lengths behind at the half, to finish second by less than one length in her first Fox Valley Flan start.

Searle stated, “after that race I took her to a fair track (Knoxville), where she wouldn’t have to go very fast. I wanted her to learn how to trot and gain some experience. Louzotic is a filly who likes her job and obviously I’m pleased the way she’s coming along. Like I said, she’s special.”

Next up for Louzotic, a daughter of Lous Legacy out of the ICF broodmare Fox Valley Lexus, is Sunday’s second leg of the Fox Valley Flan.