We’re getting to the mid-way point of the ICF two-year-old stake season for trotters with Sunday night’s second legs of both the Fox Valley Flan for fillies and the Kadabra for colts and geldings.

It’s also around the time we start to separate the contenders from the pretenders when it comes down to the possible finalists in both stake series on Hawthorne’s (Sept. 23) Night of Champions.

Thus far two major stakes races have been contested in the ICF freshman trot divisions, the initial legs of the Fox Valley Flan and Kadabra and the Violet and Cardinal showdowns. Still to come are the State Fair championships at Springfield and Du Quoin and the last two legs of Hawthorne’s stake series events.

In the first season male trotting division the score is one each for Cardinal champion True Detective and the J D Finn tandem of Cruzen Cassi and Mt Erie Mafia, the opening leg winners of the Kadabra. The trio is among the eleven youngsters going postward in tonight’s seventh race Kadabra stake.

Cruzen Cassi (Jared Finn) out-nodded True Detective in a division of the initial Kadabra stake series however True Detective turned the tables by winning by almost five lengths in the recent Cardinal. 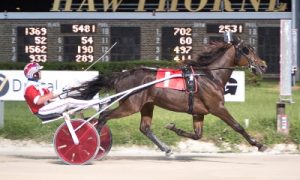 Casey Leonard not only got an easy lead with True Detective from the one-slot in the Cardinal but he had the Curt Grummel trained freshman hardly worked up a sweat when the half was reached in a pedestrian time of 1:03.3

After a modest 30.2 third panel True Detective trotted home in 27.4 at the end of a 2:01.2 mile for owner and breeder Dr. Patrick Graham of Pittsfield, Illinois.

Cruzen Cassi was a non-threating third in that race while stable-mate Mt Erie Mafia decided instead of trotting that night, he would run around the track and ended-up distanced.
Trainer Mike Brink has a pair of starters in tonight’s Kadabra and the draw for posts couldn’t have gone any worse for the Springfield based conditioner, Illinimight (Kyle Wilfong) drew the outside 10-post while Cardinal runner-up Vic’s Pizza has to start in the second tier with post 11.

Thirteen or more entries were needed to split the stake race but maybe down the line something can be worked out to make it a fair start for all the competitors.

If an owner(s) writes a check for a four-figure stake nomination payment and then hands over a $200 starting fee for each leg as well, he or she should be able to have their horse on the gate.

Even with an outside post a driver has a choice: He can leave for the lead or an early hole or he can duck and take his chances from coming from out of it. With a second tier start there’s no choice to be made.

The driver follows up the one-horse and is at the mercy that horse stays on stride (no sure thing with a 2-year-old trotter). He then hopes he doesn’t get into a traffic jam and somewhere in the race Lady Luck gives his horse a path to a possible victory.

What’s the over and under for a horse to go off-stride in this freshmen trot race? It was three breakers in the first leg. Sounds about right for this one as well

With 15 entries for tonight’s Fox Valley Flan the 2-year-old filly trot was split into a pair of $12,000 divisions.

The second race first division of the Fox Valley Flan is headed-up by Violet champion Trotting Grace (pp 3, Kyle Husted). The Cassis filly is listed at 7-5 in the Hawthorne morning line. 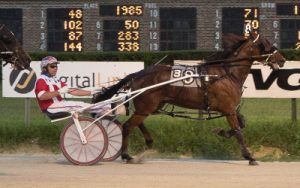 It’s All Casey: The second round of the Incredible Finale stake series for ICF 2-year-old male pacers turned out to be the Casey Leonard show as the meet’s leading driver steered all three winning freshman.

Casey guided Jim Ballinger’s Fox Valley Gemini ($2.40) to his fourth consecutive win in as many career starts in the opener. The Terry Leonard trained gelding shook loose from the middle of the pack coming out of the last turn and pulled away to a 1:56.1 mile at prohibitive odds of 1 to 5.

Beach Shootingstar was second, beaten two lengths and Not Me Gram took the third place check of the $12,000 purse.

In the second Incredible Finale split Casey hustled the Tripoli Stable’s Mykonos away from the outside eight-slot and dropped the Tom Simmons trainee into fourth in the first turn.

Casey pulled Mykonos ($10.20) out right before the half-mile pole, reached in 1:00.2, and the youngster quickly brushed to the top in the turn, opened up by four lengths in the lane, and had enough left to hold off the favorite Dandy Dune by three-quarters of a length. Backstreet Lawyer was third in the 1:56.2 mile.

In the third Incredible Finale stake Leonard was able to give Dane May’s Lambo ($9.40) a perfect pocket trip and the Duneside Perch gelding responded by overtaking the pace-setting Bootleg Island in deep stretch for his first career win in three starts.

Hart To Heart was third in the 1:55.2 sixth race mile mile, the fastest of the three Incredible Finale second leg divisions.

Casey would go on to drive four more winners giving the 39-year-old Harvard, Illinois native a total of seven on the 12-race card.