Now that the dust has settled from the second rounds of last week’s two-year-old Night of Champions series, it’s apparent there were some significant happenings, however they didn’t make the ICF freshmen picture any clearer.

Far from it, instead at the half-way point of Hawthorne’s juvenile stake series, all four added money contests are without a doubt up for grabs. Nevertheless, this much we do know:

. . . There won’t be any unbeaten 2-year-old stake series pacers or trotters going into the September 21st Night of Champions.

. . . Only two youngsters, both trotters from the barn of Springfield based horseman Mike Brink, have managed to follow their first leg victories with another win in round two. 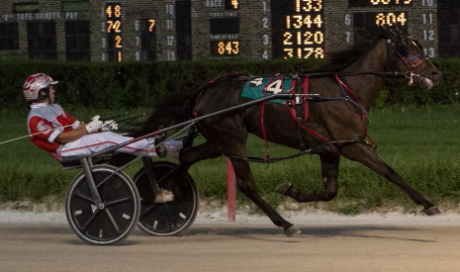 RG’S Tracer (Travis Seekman) stamped himself has a prime candidate in the Incredible Finale series with a convincing eight length victory (155.2) in last week’s second round of the ICF freshman colt and gelding pacing stake. (Four Footed Fotos)

Fox Valley Exploit (1:58), from the barn of Kyle Husted, followed his third place finish in leg one of the Incredible Tillie with a win in round two Saturday, while June Dale Gram (Ridge Warren), who was a non-threatening fourth in her July 5th debut for trainer JD Lewis ended Double Park’s three race undefeated streak in the second “Tillie” split.

In Sunday’s Night of Champions series trots, double stakes winner Lous Abigial, was second best to the Mike Brink trained Celone Hall (Brandon Bates, 2:00), in the first Fox Valley Flan for fillies. Bee See (Kyle Husted, 2:00.4), from the barn of Steve Searle, rewarded the chalk players in the second with a $2.60 winning mutuel.

Celone Hall, also was a first leg victor in the Fox Valley Flan for the Brink stable.

After Fox Valley Kobe (Kyle Wilfong), nailed down his maiden victory Sunday’s initial Kadabra division in 2:00 flat, the unbeaten Fox Valley Quest shocked the Hawthorne watchers, when he went off stride in the first turn of the second $17,500 Kadabra.

Mike Brink, the trainer and driver of Desert Sheik (1:58.3), a first round winner of the Kadabra, pounced on the “break”, powering his trotter past the pacesetter Fitchey For Fun and holding off a game effort by the fast closing runner-up Fox Valley Quest.

The next major ICF stake for 2-year-olds will come about at the Springfield State Fair in mid-August followed by the ICF championships at Du Quoin at the end of next month.

Here’s the unofficial look at the 2-year-old stake series leaders in each event after two rounds:

Not a Case of Splitting Hairs Who’ll Rise to the Top Tonight?
Scroll to top