We get our first look at 2-year-old trotters on Thursday’s 10-race card at Hawthorne and on the same program a bevy of freshman pacers, mostly ICF colts or geldings, head to the starting gate for the first time in a pari-mutuel race.

The juvenile trot will go as race five in what appears to be a wide-open betting event. Several of the youngsters had brothers or sisters who competed in Illinois and some have siblings that still are. 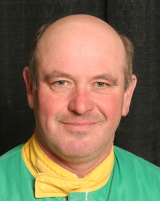 Trainer Steve Searle (pictured) sends out both Bands Houdini (pp a) and Daisy Lou Duke (pp 4) in race five. Bands Houdini is a son of Bands Golden Chip out of the broodmare Patient Dream and that makes him a full brother to Searle’s good trotter Ants Iner Pants (1:55.1) and his Patient ID (1:56.3).

Daisy Lou Duke has her older sister Taylor Tot racing in race eight Thursday. Both are out of the Mack Lobell broodmare Daisy Lee Brook.

Trixie’s Jethro is a son of Cassis and is out of the dam Tropical Trixie. Her first foal was the multi-ICF stake champion Captain Greedy (1:55.4, $161,168), currently a winner of 17 lifetime races.

Betsy B Breeze (pp 6. Matt Avenatti) is a full sister to Bobby B Breeze (1:55.3), who captured the $50,000 Plesac Final as a 2-year-old in 2013 when he raced out of the barn of trainer Roger Welch. Both are by of Southwind Breeze out of the Lindy Lane dam Lindy’s Fireball.

She’s Savvy (pp 7, Matt Kruger) is a son of the sire Cassius. The Lyle Scurlock trained filly’s dam Writtenonthewind gave us Mojo On The Gogogo, the Fox Valley Evita winner on Hawthorne’s 2007 Night of Champions when that filly was trained by former Illinois based conditioner John Butenschoen.

Matt Q (pp 10 Casey Leonard) is the younger brother of Wrightwood, another Nelson Willis trainee who was second earlier this month in a Hawthorne Late Closer Final and was a triple stakes winner last year including Balmoral’s Plesac Final. Both are sons of Powerful Emotion and the Conway Hall broodmare Racy Roz.

Fox Valley Inferno, owned and bred by Fox Valley Standardbreds is by Sportsmaster out one of the most successful Illinois dams of this century, the Broadway Express mare She’s Redhot.