It’s time for the Hawthorne spotlight to be turned to the often unpredictable 2-year-old ICF trotting division. On tap Sunday evening is the $47,400 Cardinal for freshman trotting colts and geldings and a pair of $23,900 divisions of the Violet stake for first season fillies.

Even though this is the first pari-mutuel start for all but one of the 19 fillies in the two Violet splits, there appears to be a stick-out, at least on paper, in the second race first division.

Her name is Heidi High, driven by her owner and trainer Charles Arthur. The young filly had to raise a lot of eyebrows from those who watched her compete a week ago in Springfield when she motored to 1:59.1in her initial career start and finished over 21 lengths ahead of the second place horse.

That’s a very quick mile this early for a 2-year-old trotter right ftom the get-go and that probably explains why she’s the prohibitive 4 to 5 favorite in the Hawthorne program. Of course the fact that the front-end appears to be her cup of tea and she drew the pole position tonight, certainly is another reason she’ll be hammered down at the betting windows,

However there are no certainties with 2-year-olds in mid-June, especially ICF trotters. 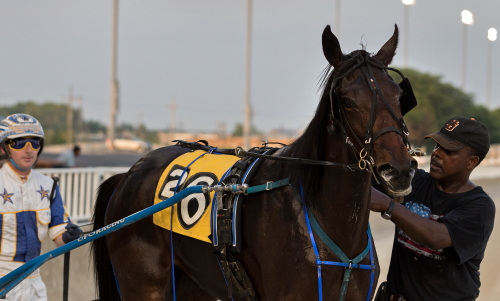 The fourth race second Violet division has Lous Mistress (Casey Leonard) and Puddin Cheeks (Jared Finn) as the 9-5 and 2-1 co-favorites in the track’s morning line.

Both fillies were timed in 2:02 flat last Sunday at Springfield in their respective races with Puddin Cheeks winning her event in front-stepping fashion by almost 15 lengths while Lous Mistress was second beaten less than a length in her race by Loussolataire (Kyle Wilfong) who leaves from the outside nine-slot in the race. The Steve Renard trained filly has already made six starts, and three came in May against older trotters at Hawthorne.

Fox Valley Picaso (pp 1) had a quick 2:00 flat winning qualifier for trainer Herman Miller when he was four lengths the best. Both Captainblacksparrow (pp 2) and Super Betcha (pp 3) were winners when they debuted a week ago at Springfield on its non-betting program. Their 2:05-plus times can be a bit misleading since both youngsters were raced easy through very modest fractions (1:02 half mile times).

Captainblacksparrow, who wears trotting hobbles, is trained by Mike Rogers while Super Betcha is out of trainer Mike Brink’s barn. 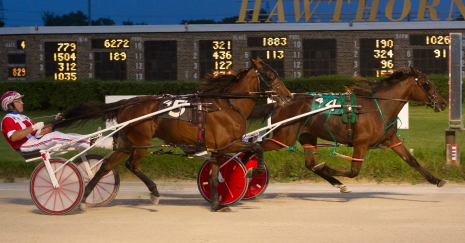 Grace Ann (Gary Rath) was third, about seven lengths behind Foolishlittlegirl who had a pocket-trip behind Yankee Joanie. Thelatter also won her debut a week earlier for owner by Milton Greer of Jackson, Tennessee.

In the second Violet pace split Ridge Warren sent the first-time starter Winter Gram ($10.00) to the front and nicely rated the home-bred filly to a winning 1:58 mile for co-owners owners and breeders Carol Graham and trainer Tom Graham Jr. of Salem, Illinois.

The even-money favorite Fox Valley Halsey (Casey Leonard) shook loose in the lane late and ended-up a half-length behind Winter Gram. Fox Valley Hotcake was third, another three lengths behind.

Anna’s Lucky Star (Kyle Wilfong) made it back-to-back victories in the $10,000 Open Trot for trainer Nelson Willis when she worn down Picky Picky Valor in the stretch and pulled away by three lengths in a 1:55 flat mile.

Narcian Jewel (Tyler Shehan) came from far out of it and powered past in time to take the $10,000 Open Pace for fillies and mares by a neck over Pretty Image (Tim Curtin). Frank Petrelli trains the 1:52.3 winning mare.

The trotter Overandovervictory (Kyle Husted) popped at $19.60 mutuel as my one and only Saturday “Price Shot.”