Harness racing at the Du Quoin State Fair gets under way Friday night with a rare 7 o’clock first post. While afternoon races at the Illinois State Fair meets have been the norm, racing this evening makes a lot of sense.

Usually, a state fair nighttime racing card would go head-to-head against a Chicago circuit race track, but that’s not the case this year. Hawthorne is dark both tonight and Saturday and that should boost, perhaps significantly, Friday’s  Du Quoin’s total handle.

Also, a larger crowd will most likely be on hand on a Friday night and the live handle should be greater than in recent Friday daytime Du Quoin cards.

At least that’s the hope.

While the recent Springfield harness racing meet was a huge success, the handle figures could have been elevated some if there were more mutuel clerks and betting machines available at the Illinois State Fair.

Springfield attendance for the races this year was probably better than management expected, producing an insufficient number of places to wager, hence more potential bettors were “shutout” than customary, and that’s not a good thing.

All the Illinois ADW’s, OTB Parlors, Hawthorne and Arlington Trackside will take wagering on tonight’s Du Quoin racing card and with all the major drivers competing at the Southern Illinois facility and the familiarly  with Chicago circuit players with the ICF stake horses participating, a better-than-normal Du Quoin handle tonight is anticipated. 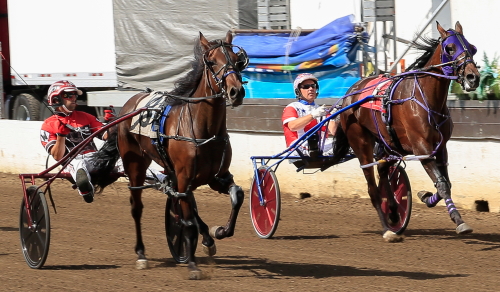 Next up is another filly stake. It’s the Directors Award for juvenile pacers with a full field of ten (note, the 10-horse at Du Quoin starts in the second tier). The Erv Miller trainee, Sleazy Gal, should get plenty of play after her gutsy win at Springfield, when she was parked to a 26 flat first quarter and still dug in for a 1:54.1victory.

A couple of three-year-old stakes are the last two races tonight.

The Pronto Don for trotting colts and geldings has the Flacco Family Farms homebred Lousraptor (Casey Leonard), as the 8-5 first flash favorite after his two convincing triumphs at Springfield.

Next Up: Day two of the Du Quoin meet is Saturday, with a first post of 12 noon. The 12-race card will conclude with the Darn Safe trot for two-year-old colt and gelding trotters, the Governor’s Cup for freshman male pacers, and the Dudley Hanover for three-year-old pacing colts and geldings. All three stakes will carry the same $27,250 purses as Friday night’s championships.