Homepage
You are here: Home1 / Mike Paradise2 / Full 10-Horse Fields in Every Race 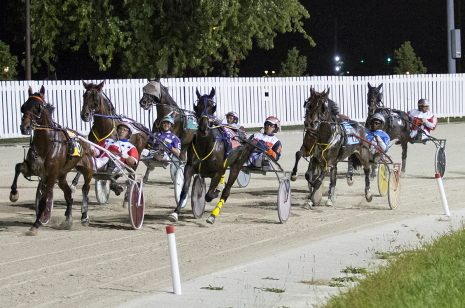 A total of 130 horses will be coming out of the final turn tonight on Hawthorne’s 13-race program with all 10-horse fields. (Four Footed Fotos)

There are those in our industry that believe the best way to a good nightly mutuel handle is to race full fields on a mile track regardless of the class level of the horses.

If these horse players are on target then Hawthorne could hit the bullseye Sunday night handle-wise. Its Race Office has delivered in a big way the numbers to do so tonight.

It’s a 13-race card and every event has a full field of 10 horses across. Plus you won’t find a lot of prohibitive favorites. The vast majority of the races offer very competitive fields and could make for some large gimmick pools.

The one negative for tonight is that it’s a holiday weekend and history shows those are not always good nights for the handle. However, the Covid virus still a serious problem and it’s keeping a lot of people home—with their computer or hand held device available—and not traveling about like they would normally do.

The Sunday headliner is the ninth race $8,100 conditioned pace for fillies and mares with four of the starters—Windsum Brooklyn, Sweeter Machine, Look Kimbo and Suddenly Royal—dropping out of the Open Pace ranks.

Sunday’s schedule Open had to be scrapped when only four mares entered.

Advantage to Mimi? Now that we are in July you’ll see a lot more two-year-olds in action. The second and ninth races are for juveniles and all but two of the 20 babies going to the gate are making their debut.

When going through the second race for freshman fillies the No. 1 horse Always A Mimi (Mike Oosting) caught my eye when I noticed her dam is Sportsmisteress. It sounded familiar and a little research revealed that the Mike Brink trainee is a half-sister to the former ICF champion Home Bed Advantage who was a terror in the middle of the century’s first decade.

In 2008 Home Bed Advantage racked up victories in his first eight starts, including the $285,000 Orange & Blue and $63,000 Cardinal Finals for trainer Dave McCaffrey. The son of Cole Muffler out of dam Sportsmistress only season loss came in his last race of the year when he was second best in the $135,000 American National stake at Balmoral.

Home Bed Advantage, named after a popular episode on the old Jerry Seinfeld TV show, made over $247,000 in his first season and hauled in another $258,702 in his three-year-old campaign. The talented pacer took his mark of 1:51.4 at Hawthorne as a four-year-old.

Pardon My Dust: We didn’t have to wait long to determine the first of two $20,000 Cicero Claiming Series. The final for the fillies and mares came in last night’s first race and the 1-2 favorite Barley Nation (Kyle Wilfong) left no doubt she was the best.

Wilfong sent the Derek Burkland trainee out from the three-slot and the six-year-old mare showed her heels to the field, cutting fractions of 27.1, 27.4, 27.3 and 29.4, and finishing more than four lengths ahead of Unbroken Circle. The winning 1:51.4 mile was Barley Nation’s third victory in her last four Hawthorne starts for Michigan owner Britney Dillion

Several races later the $20,000 claiming final for “the boys” saw Salvatore ($5.00) prevail with Casey Leonard to give a sweep of the series championship to the Burkland stable and owner Britney Dillion. Salvatore was one of five winning drivers on the card for Casey.

Leonard got Salvatore away third and on the backside moved the five-year-old ICF pacer to the front, ahead of the pace-setting Fox Valley Hijinx. The even-money choice Youmakemyheartsing (Kyle Wilfong) had to take a lot of air through a 27.2 third quarter to draw even with Salvatore near the top of the lane but couldn’t get past.

Salvatore ended up a half-length ahead of Fox Valley Hinjix at the end of the 1:52.3 mile with a fast closing (26.3) Gold Star Lambeau (Cordarius Stewart) coming on for third.

She’s Back: Despite a tough trip the six-year-old ICF mare Anna s Lucky Star ($5.80) captured Saturday’s $10,500 Open Trot with her regular driver Kyle Wilng, one length ahead of Pine Dream (Todd Warren). It was career victory 35 for the Nelson Willis trained trotter owned by her breeder Danny Graham of Salem, Illinois, and the mare’s first in three starts for this season.