By Mike Paradise
The ICF freshman colt pacing troupe was very competitive last year with the eventual division titleholder not decided until the Cardinal Final, the final stake race of Hawthorne’s season.
That victory went to the Tom Simmons Stable’s Fox Valley Herbie and it likely propelled the youngster to his 2016 Illinois 2-Year-Old Colt Pacer of the Year honors.
All the freshman ICF leaders, along with some new faces, will be back for this year’s Illinois bred 3-year-old added money events including the multi-stake winner Gabe Henry.
The Tom Graham Jr. home-bred trainee rattled off seven triumphs in his first season in 11 tries and earned over $55,000. He took his mark of 1:52.2 in his winning Springfield elimination.
I assumed Tom was very happy with Gabe Henry’s first year of racing?
“Yes and no,” he answered. “There was one start that didn’t work out very well for us and unfortunately it came in his last race and that was the Cardinal.
“Gabe is a horse that races way-better off the helmet and that’s why I think he lost that race. He had to be used earlier than Todd (driver Warren) wanted. The winner (Fox Valley Herbie) got a perfect second over trip while Gabe had to race hard to make the front end. He likes to pass horses. Once he got to the front that night he got a little lackadaisical and he couldn’t get back in gear to hold off the late closers.” 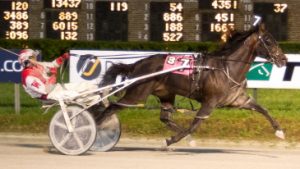 Gabe Henry ended up fifth, the lone time he was off the board as a freshman for owner and breeder Carol Graham of Salem, Illinois. At one time Gabe won five races in a row and a trio of them came in the first three legs of the Incredible Finale Series.
Since there are no “do-over’s” in horse racing, the son of Henry Clay out of the Graham’s broodmare Startrix Gram will have to wait until Hawthorne rolls around to even the score against some of his ICF rivals.
Is Gabe Paul back in training?
“I’ve started to train him back and he’s coming along okay,” replied the 46-year-old resident of Salem, Illinois. “I don’t know if he’ll be ready for the first week of May but he’ll be ready very quickly once the Hawthorne meet does open (Thursday, May 11).
“He did get a little bigger. ‘Gabe’ was pretty mature as a 2-year-old but he has matured a little more over the winter. He’s a stud colt, so he’s still obnoxious.”
Gabe Henry will have a sibling competing in the 2017 Incredible Finale stake series.
“I nominated his half-brother to this year’s 2-year-old Hawthorne stake series along with a couple of fillies. The colt’s name is “Not Me.”
“If you have multiple kids and you walk into a room and a lamp is broken you ask them who did it. They’ll answer “Not Me.”
What parent hasn’t heard those two words uttered?
Time Running Out: It is “Last Call” for horsemen to make their 2-year-old eligible to Hawthorne’s two-year-old stake series races. Nominations are due tomorrow (Saturday, April 15). A nomination form can be found at wwwHawthorneracecourse.com.
The Ray Hanna Stable
A Dandy Tune-Up: Fox Valley Dandy had the fastest winning mile in last Tuesday’s qualifiers at Springfield with a 1:55.2 clocking. The Sportsmaster filly, owned by Hugh Lake and Susan G Lacey of Joplin, Missouri was driven by Mike Brink and is being pointed to Hawthorne’s Plum Peachy stake series for ICF 3-year-old filly pacers.
The fastest last quarter in Tuesday’s qualifiers was a very quick 26.2 final panel by the 3-year-old Illinois bred gelding Causway from the Mike Brink Stable. The son of Yankee Skyscraper is getting ready for Hawthorne’s Robert Carey stake series. Causway is owned by his breeder James Hepp of Steelville, Illinois.
http://harnessillinois.com/wp-content/uploads/2021/03/ihha_logo_white_wtext_v2-300x130.png 0 0 Mike Paradise http://harnessillinois.com/wp-content/uploads/2021/03/ihha_logo_white_wtext_v2-300x130.png Mike Paradise2017-04-14 13:06:322017-04-14 13:06:32Gabe’s Sweet First Season Had Sour Ending