Homepage
You are here: Home1 / Mike Paradise2 / Gamble Pays Off Handsomely for Kanitz

Anytime a horseman buys a pacer or trotter it’s a gamble. Sometimes that roll of the dice pays off and of course, sometimes it’s a failure. For trainer Dale Kanitz and his wife Cathy their acquisition last summer of the ICF pacer Susan Page hit the jackpot for the Olney, Illinois couple.

Susan Page had an incredible run the Kanitz stable in 2019. The then six-year-old mare made 17 starts for her new connections and came away with 11 first place finishes, including five in a row last August at Hawthorne.

The Sagebrush mare put an explanation point on her very successful campaign with a victory on the Night of Champions in a $12,000 ICF event and then another with an early November Open Pace triumph at the new Kentucky facility Oak Grove where she bested the likes of the recent March 8th Hawthorne Open winner Dee Rocks. 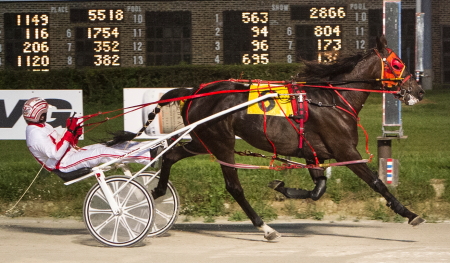 Susan Page hauled in over $46,000 for the Kanitz’s, about nine times more than she made in any previous year of racing. The mare had only earned a little over $12,000 in her first three seasons.

“Except for a few Hawthorne starts (as a four-year-old) Susan Page raced at the fairs for Darla Martin, who did a great job of getting her to the races,” said Dale. “There was no way the mare was going to make much money racing at the fairs so that’s why she didn’t have a lot of lifetime earnings.

“I had been watching Susan Sage closely at both the fairs and Hawthorne where I’m based during their meetings. I felt there were few things I could try to do to improve her so I offered to buy her from Darla. We got together, settled on a price and after I bought her the horse came on well for us and became a very good racing mare.

“Getting a win with her on the Night of Champions was really a thrill for us,” continued the Tuscola, Illinois native. “I really enjoyed racing her at Oak Grove in Kentucky. It’s a beautiful facility and they’re especially kind to horsemen. If you needed anything all you had to do was ask and it got done.”

Kanitz took Susan Sage back home to Olney this past week.

“I had Susan Page at Hawthorne with me and was training her for her first season start but something wasn’t right about her,” said Dale, who celebrated his 72nd birthday last Thursday. “Eventually she popped a splint, so I took her back home while we wait for Hawthorne to restart. We’re looking forward to racing her in conditioned races and Opens this summer.”

A $3,500 yearling buy at the 2014 Illini Classic, the daughter of the Artsplace mare Mystic Art, missed just one purse check her new owners and took her mark of 1:52.3 in her Night of Champion victory. Besides her 11 wins Susan Sage also had four second place finishes for Kanitz.

Be Smart, Be Safe “Exploit” Ready, Husted Getting Closer
Scroll to top