Heidi High was an easy winner in her Violet division and was bet down to below even-money. There was no doubt last week the filly would again be in control of the race for owner, trainer and driver Charles Arthur, leaving from the pole position a second time.

The 4-5 favorite, as expected, cut the fractions. What wasn’t expected was that this time, she was overtaken by E L Game On ($12.80), in rather comfortable fashion in the 2:01 flat mile. 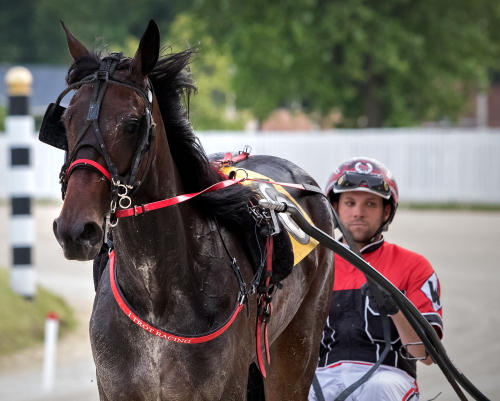 “I was very pleased the way she raced last week,” said her trainer Mike Rogers. “I think she’s among the top four filly trotters in in her division.”

E L Game On was second best to Heidi High in their Violet match-up, beaten almost five lengths. But a closer look at the replay of that race, shows E L Game On was fifth on the inside, while the third place horse was gapping, pushing the fillies behind her further back.

E L Game On was more than a dozen lengths in back of the Violet winner at the half (59 flat), and made up seven lengths on Heidi High in the second half of the mile.

“She trotted a fast third quarter (28.1) and made up a lot of ground. I was happy to get second in the Violet, but if the trip went better than it did, she would have been a lot closer at the wire.”

E L Game On is owned by Donald and Sharri Huddleson of Palmer, Illinois. The filly was sired by the Illinois stallion Cassis and is out of Elmer Kaufman (Arcola, IL), Illinois broodmare High Game.

“We have all three of the foals of her dam,” continued Rogers. “Her older (3-year-old), sister is E L Miss Kaibra. Right now I’ve been racing her at the fairs. And we also have their yearling sister (E L Oh Govner).”

Rogers was the trainer of Huddelson’s most productive ICF trotter Macie Rae, a winner of 36 races from 2013 through 2017. As a freshman Macie Rae won the Windy Skeeter at Du Quoin and as a 3-year-old the Powerful Emotion mare earned over $67,000 while capturing the Lady Ann Reed Consolation at Balmoral Park.

Rogers is bringing E L Game On along slowly, with hopes of a long and fruitful racing career like Macie Rae delivered for the New Berlin, Illinois based horseman.

“E L Game On is staked to all the Illinois races. She’ll race at Springfield. As far as Du Quoin, we’ll see how things go. It’s always hot at Du Quin and there are only four days between 2-year-old stake there and a leg of the Fox Valley Flan at Hawthorne.”