With rather comfortable back-to-back Open Pace victories on his list of recent successes Hawthorne’s kingpin Fox Valley Gemini is getting a well-deserved week off to prepare for next weekend’s Night of Champions Robert S. Molaro stake eliminations.

If elimination races aren’t necessary a prep race will most likely be offered on the $45,000 Molero showdown for ICF pacing colts and geldings ages four and upward, one of ten ICF state-bred contests to be decided on the Saturday, September 21 Night of Champions.

With Fox Valley Gemini absent Friday night and last week’s second place finisher Granite back in Indiana, tonight’s Open Pace was shelved and instead a high-end $9,500 conditioned pace will be the feature attraction on a nine-race card. 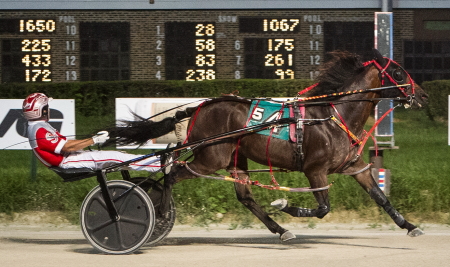 Parklane Official (pp 8,), one of a trio of Nelson Willis trained pacers in the field, is listed as the 3-1 programed favorite, followed closely by Rising To The Top at 7-2.

The Ray Hanna trained He Gone Jack (pp 1) comes off a season best 1:51.4 victory in last week’s Department of Agriculture stake for aged ICF male pacers, beating Yourmyhearthrob, the 2018 Springfield champion as a three.-year-old. Both horses are possible starters in the upcoming Molaro stake at Hawthorne

Looking Ahead: It seems like every year the Night of Champions Molaro $45,000 aged pacing stake and its $15,000 elimination lure some top-notch ICF horses from out-of-state.

In 2018 the one-two finishers Unlocked and Stonedust came to town and took a hefty portion of the stake’s purse money.Both horses are eligible to return and compete again but it’ll take a $500 entry fee to do so.

Unlocked has a history of competing on Chicago circuit Super Night type programs for his Chicago, Illinois owners, the Megan Rogers Racing Stable who purchased the horse after his first two career two starts (both wins) in June of 2013.

As a three-year-old Unlocked was a dominating 11 and 1/2 length conqueror of the Pete Langley Memorial Final at Balmoral Park with Dave Magee at the lines for trainer Erv Miller.

The winner of over $600,000 lifetime Unlocked finished fourth in Balmoral’s Tony Maurello aged pace championship as a 4-year-old however he came back to Illinois at the age of five and captured Hawthorne’s inaugural Robert Molaro Memorial championship in 2016 with Jim Pantaleano driving for trainer Norm Parker.

At six, Unlocked was sidelined from late April on and missed the 2017 Molaro but the talented ICF pacer came back to his home state in 2018 and held off Stonedust by a neck at the end of a 1:51.1 mile in the Molaro championship.