With two-time Illinois harness Horse of the Year Fox Valley Gemini Minnesota bound for the upcoming $60,000 Dan Patch stake at Running Aces, maybe it’s only fitting that a former Gopher State champion will be taking his place in Friday’s Hawthorne Open Pace..

He’s Stuckey Dote and like “Gemini” this gelding is trained locally by Terry Leonard and driven by Hawthorne’s perennial driving champion Casey Leonard.

Now six, Stuckey Dote was the Minnesota champion as both a two and three-year-old when he was conditioned by his owner and breeder Martin Van Otterloo of Rock Valley, Iowa.

In his next three seasons the home-bred pacer put some very nice numbers on his card by campaigning in both Minnesota for trainer Bret Ballinger and in Ohio out of the barn of trainer Dan Ater. 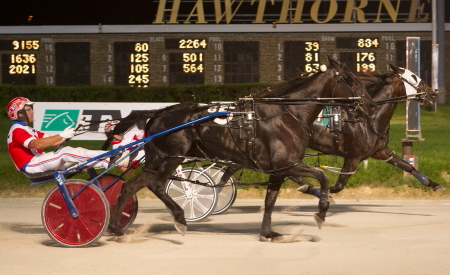 In his first Hawthorne start a week ago Stuckey Dote (No. 5, Casey Leonard) finished second to his Terry Leonard trained stable-mate Ponda’s Prospect (inside with Ridge Warren). Four Footed Fotos)

In 2018 Stuckey Dote earned over $120,000 and posted a flashy record of 8 wins, 6 seconds and 2 thirds in 31 trips postward, all the while competing many times in Opens in those two Midwest states.

Stuckey Dote tested the Hawthorne surface for the first time a week ago in the second $12,000 Open on the card (naturally his new stable-mate Fox Valley Gemini won the first Open) and the Minnesota invader was second best to Ponda’s Prospect (Ridge Warren), another Terry Leonard trainee, in a 1:51.3 mile.

“Stuckey Dote hadn’t raced in about three weeks so he raced like a ‘short” horse,” said Casey. “He’s a nice horse and he performed well but like I said we thought he could be a little short in his first time out for us. Hopefully he’ll be better this week.”

As a freshman Stuckey Dote went a dazzling 7 for 9 for Van Otterloo and blew away the field in the $21,000 Minnesota State Championship, almost six lengths the best with a 1:56.2 clocking.

At three the pacer won half of his 14 starts, lowered his mark to 1:54.2 and again was an easy winner in the $25,000 Minnesota sired 3-year-old colt and gelding showdown.

In 2017 the horse captured an Open at Running Aces for Ballinger and then went to Ohio and came out on top in a trio of Opens at Northfield Park for Ater. The horse’s fastest win that season was a 1:52.2 mile on the Ohio half-miler.

Last year Stuckey Dote started out in Minnesota and finished in that state but in between bagged a couple of Opens at Miami Valley including a new lifetime mark of 1:50.3 on the five-eighths Lebanon, Ohio oval.

In May the horse sped to a 1:50.3 victory at Running Acres before taking back-to-back Opens at the Minnesota track and that string of successes earned the Veracious Hanover pacer the assigned outside seven hole in Friday’s fourth race feature.