Homepage
You are here: Home1 / Mike Paradise2 / Gulp, a Past Irresponsible Track Promotion

Last week we gave you some of our favorite harness racing promotions on the Chicago circuit through the years, so this time around let’s take a look at a promotion that would be best forgotten and never repeated and that would be Sportsman’s Park Free Beer Night back in July of 1974.

Yes you read that right. FREE BEER and not just one free beer per patron, but as the adjoining ad proudly announced “All the Beer You Can Drink.” 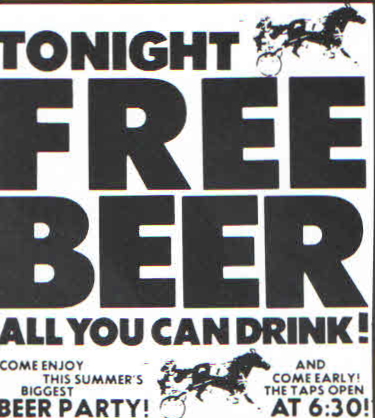 And to facilitate that their patrons would have the opportunity to leave the track “drunk as a skunk” Sportsman’s Park opened its beer taps at 6:30 pm, a full one hour and forty five minutes before the first race post.

Since the first race got under way in those days at 8:15 pm and the last concluded sometime after 11:30 pm, that gave patrons at least FIVE full hours to drink their way into a stupor at what the track’s newspaper ad called “This Summer’s Biggest Beer Party.”

The track’s harness kingpin got the brainstorm from major league baseball. That was a time when the country’s pastime wasn’t drawing very well at a number of its ballparks. In an almost desperate attempt to try and lure people to its ballparks, Ten Cents Beer Nights were held at some facilities where beer back then sold for 65 cents for a 12-ounce cup, a far cry from what it is today.

On June 4, 1974, about six weeks before Sportsman’s Park’s Free Beer Night, the Cleveland Indians held a Ten Cent Beer Night at old Cleveland Stadium. A crowd of over 25,000 showed up, more than twice the normal attendance, and were limited to SIX cups for each trip to a Beer Stand. And the ball club didn’t put a limit on how many purchases could be made during the game. Not surprisingly, as the night got longer, the crowd got more and more rowdy.

It didn’t take long for a woman to run out to the Cleveland Indians on-deck circle and flash her breasts to the crowd. Later a naked man ran around the field. Then a father and son mooned the bleachers. As the night went on the ball players were pelted with hot dogs and then firecrackers were thrown into the Texas Ranger’s dugout.

With the scored tied in the ninth inning, more and more people ran onto the field and a riot ensued. The Rangers players went on the field with baseball bats to protect their teammates from the unruly crowd which caused more fans to run on the field. The Indians players left their dugout to help fight alongside the Rangers players. The police had to be brought in and numerous fans were arrested and charged with disorderly conduct.

When the bases were literally stolen (and never returned) and the playing field a mess, the umpires had little choice but to forfeit the game to the Rangers.

With this fiasco of a promotion giving baseball an unforgettable black eye, you might think Sportsman’s Park management would then put the brakes on its planned Free Beer Night . . . but you would be wrong.

The racetrack went ahead with its Free Beer Night and vindicated it by announcing it would issue a one cup per person per beer stand visit to control how much alcohol a patron would consume. However the race track put no limit on the number of free beers dished out to its patrons through the night.

Not unexpectedly many patrons who got their free beer, immediately went to the back of the beer line and drank their way to the front to have another, and then another, and . . .

While the track’s attendance got a boost that night, the mutuel handle didn’t. It shouldn’t have been much of a surprise that intoxicated people prefer to keep drinking free all night and keep their money in their pockets rather than take it out and bet on the horses.

Luckily, there was no rioting at the track that night and Sportsman’s management afterwards boasted “there wasn’t even a single fight.”

Even if that was an accurate statement, and that’s doubtful, how can a racetrack justify a promotion they knew would send hundreds and perhaps thousands of drunk drivers on the road?