Illinois harness racing undergoes a significant change of scenery tonight with the opening of the two-day meeting at the Du Quoin State Fair.

Instead of a background of expressways and busy city streets with noisy tractor-trailer trucks whizzing past, the state’s harness racing venue will offer a view of a rural and tranquil countryside, quietly tucked away on the southern portion of Illinois, some 300 miles or so away from the hustle and bustle of the Chicago area.

Harness racing at Du Quoin State Fair is rich in tradition but gone are the glory days of the Hambletonian, the World Trotting Derby and a “must stop” on the sport’s prestigious Grand Circuit.

Nevertheless, each year it’s remains an important visit for ICF pacers and trotters and their Prairie State horsemen with its bevy of prominent stake events for state-bred horses of both gaits and sexes.

Also sprinkled throughout the weekend Du Quoin racing programs are County Fair Challenges and Illinois Topline events for those pacers and trotters who competed on the state’s county fair circuit.

The same top drivers on the Chicago circuit will be make the six-hour or so drive to Du Quoin and that’s one of the major reasons Hawthorne is “dark” tonight and will race on Saturday, Sunday, and Monday.

With two Illinois harness racing programs originally scheduled at the same time Friday night, who was going to drive the Hawthorne horses that’s IF a Chicago circuit card could have even been assembled?

The official word on the “adjusted” schedule didn’t come until a week ago. It could have, and for that matter, should have, been announced months ago when Du Quoin officials made it known they would go with a 7 pm first post on their opening racing card just as they’ve done in the past. 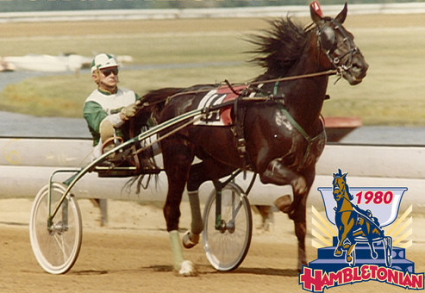 In 1980 Burgomeister won the last Hambletonian stake conducted at Du Quoin. The prestigious three-year-old trotting stake was moved to the Meadowlands the following year. (USTA Photo)

Be that as it may, Friday evenings’ first Du Quoin program has a pair of two-year-old championships to be decided, a trio of three-year-old showdowns, and both ICF aged trots title fights, one for “the guys: and the other for “the gals.”

With eleven entries the Director’s Award for ICF pacing fillies had to be split into two divisions, each worth $16,500. Springfield winner Rollnroz (Archie Buford) and Incredibie Tillie second leg victor Rsmissashlee (Kyle Wilfong) figure to get the most play in race three while the second split (race four) is headed up by Fox Valley Captiva, pp 1, Atlee Bender), Springfield final runner-up Dandy’s MNM (Kyle Husted) and Iwannarocknroll (Travis Seekman), third at the Illinois State fair showdown after winning her elimination. 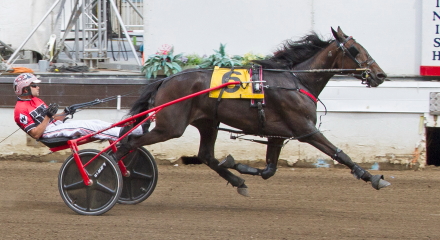 Early Races: With a scarcity of entries for both $7,000 Aged Trots, they’ll be contested before the betting card with a 6:15 post for the filly and mare division made up of Bee Cee, Annas Lucky Star and High Queen Annie. (In that order). They’ll be followed by the aged division for male trotters and again it’s a three-horse field: Talk About Valor, Primed N Powerful and Frontier Manard).

A Wise Move: If you’re wondering what the ICF star pacer He’zzz A Wise Sky is doing this weekend the answer is that the four-year-old gelding is at Hoosier Park tonight where he was handicapped with the outside seven-slot in their 12th race $22,000 Open Pace. John De Long has the catch-driver behind the John Filomeno trained pacer.