By Mike Paradise
Hawthorne’s first summer harness meeting in eight years is behind us and one of the major concerns going into it was would they be able to attract enough horses?.
Before the summer meet got under way in early May the Illinois Racing Board approved Hawthorne’s request to scrap the five-night-week format that was granted to them seven months earlier at the Date Hearings for a Thursday through Friday arrangement.
The IHHA approved the four-day format when the track agreed to race 45 contests a week.
I wrote back at that time that I was optimistic that the horse population for 45 races on four racing cards a week would likely be doable. As the summer meet progressed my optimism dwindled.
As I look ahead to 2017 I’m not optimistic at all, at least not at this time. 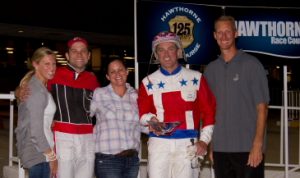 Casey Leonard was honored by Hawthorne on closing night as its leading driver. (Four Footed Photo)

Without a winter meet more small Illinois stables will go out of business before next summer comes along and some the bigger ones that venture to places like Ohio, Indiana, our further out East may never come back for what will be much smaller purses to race for at Hawthorne.
My earlier optimism was based on a winter meet at Hawthorne that exceeded expectations in mutuel handle both off and on-track.
The average handle in the winter meet was $916,596. The average handle for the summer dropped to $849,215, more than $67,000 a night below the winter figure and the January meet averaged $4,000 more a night on-track.
The summer on-track attendance could have been higher, no-doubt boosting the on-track handle, if Hawthorne wasn’t charging its patrons $2.00 to get into its Grandstand that wasn’t air-conditioned.
You read that right, no air-conditioning during one of the hottest and sticky summers in Chicagoland history. There wasn’t any air-conditioning in the Grandstand back in 2008, the last time Hawthorne had a summer harness meeting either. Eight years later and it still didn’t get fixed.
The winter meet did have a stronger numbernt of open company horses, Most of those better open horses rarely ventured to Hawthorne for the summer meet and who can blame their owners and trainers when they were competing elsewhere for double the amount of purse money not only in Invites and Opens, but in mid and high level conditioned paces as well.
That isn’t going to change until the playing field is leveled between Illinois and other Midwest states with on-track slot money.
And is that more wishful thinking? 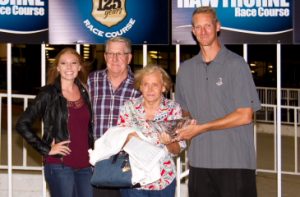 Congratulations go out to Casey Leonard who followed his leading driver honor at Hawthorne’s winter meet with another title during its summer session and to Nelson Willis, the leading trainer at Hawthorne’s summer meet.
Casey, who tuned 39 on September 11, won at a 22 per cent clip while bringing home 185 first place finishers. Todd Warren was next with 147 winners, followed by Kyle Wilfong with 72, Kyle Husted with 70 and Dale Hiteman with 53.
Willis sent out 54 winning horses in the summer session, 10 more than Frank Petrelli, who came in from California. Rounding out the Top Five in the trainer standings were Terry Leonard, Ronnie Roberts and Kim Roth.
http://harnessillinois.com/wp-content/uploads/2021/03/ihha_logo_white_wtext_v2-300x130.png 0 0 Mike Paradise http://harnessillinois.com/wp-content/uploads/2021/03/ihha_logo_white_wtext_v2-300x130.png Mike Paradise2016-09-28 12:31:392016-09-28 12:31:39Hawthorne Horse Shortage a Sticky Situation