Tonight it’s a heavy dose of the colt and gelding ICT stake races on the Hawthorne card. Saturday night it’s a bevy of state-bred filly and mare events on an extra-large 16 race program that will get under way at an earlier-than-normal 6:30 first post.

Nine of tonight’s 13 race card are ICF stake eliminations or prep contests originally scheduled for Springfield but moved to Hawthorne when the raging Covid-19 virus wiped out this year’s Illinois State Fairs.

One of the more intriguing stake eliminations is the eleventh race second division of the ICF three-year-old male trot. It could very well be a preview of next Friday’s championship. 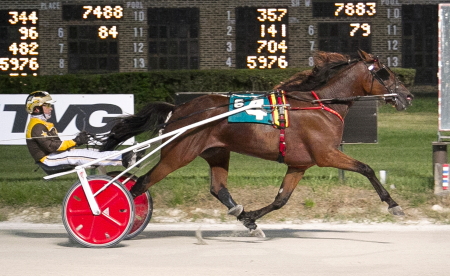 Both trotters have won their last two respective legs of Hawthorne’s Erwin F. Dygert Memorial trotting series. While the Tom Simmons stable’s Fox Valley Quest was named the 2019 Illinois Two-Year-Old Male Trotter of the Year it was Crooked Creek who took home the Kadabra championship blanket on the Night of Champions for trainer Mike Brink.

With regular driver Mike Oosting at Hoosier Park Todd Warren takes over the lines on Crooked Creek who brings a four race winning streak into tonight’s contest that includes a one length triumph over his main rival in the June 21st Cardinal, Todd was also in the sulky when Crooked Creek edged Fox Valley Quest in a July 18th Hawthorne conditioned trot in a career fastest time of 1:55.4.

However when these two talented ICF trotters met up in this season’s first Dygert event back in mid-June, it was Fox Valley Quest proving best after Crooked Creek went off stride. “Quest” has finished first or second in 19 of his 20 career starts. Crooked Creek’s mishap in the first Dygert of the meet is the only time the Cassis gelding hasn’t been victorious in his seven season starts. 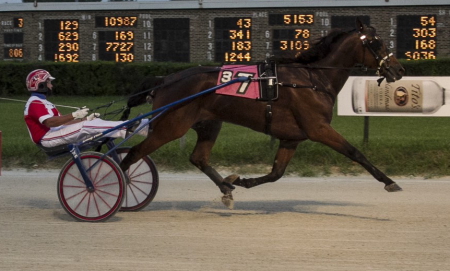 Fox Valley Quest (Casey Leonard), another starter in race eleven tonight, has a gaud lifetime record of being first or second in 19 of his 20 lifetime starts for trainer Tom Simmons, (Four Footed Fotos)

A Gem Resurfaces: Illinois most popular pacer Fox Valley Gemini returns to the races tonight after getting last week off and this time it’s not in an Open. Instead the pride of the Terry Leonard likely will be a prohibitive favorite in the second race ICF stake prep for older state-bred pacers.

Fox Valley Gemini (Casey Leonard) drew the outside nine-slot but what’s new? The now five-year-old gelding had the 8, 10, 10, 6, 9 and 7 in his last six Open outings. Fox Valley Gemini’s 1:50 mile two week ago equaled his lifetime mark and was victory No. 35 in 51 career starts.

It’s a Goodie: While there are only five starters in the seventh race prep for Illinois bred aged trotters it’s a doozie with Lousraptor (Juan Franco) coming out of a second place finish in an Open, Frontier Manard (Freddie Patton Jr.) putting a five-race victory streak on the line, and last year’s Springfield champ Talk About Valor going from the 10-hole to the pole position.

Majistic Caprice and Southern Appeal are the longshots of the race.