By Mike Paradise
The list of nominated horses for Hawthorne’s upcoming Late Closer Series has been tabulated by its’ race office. A number of new faces will be on hand to engage a multitude of ICF pacers and trotters, making for some upcoming intriguing events.

Late Closer No. 1, the Walter Paisley for filly and mare pacers that were non-winners of $30,000 (ICF $45,000) lifetime through March 31, 2017, lured 16 horses including such 4-year-old invaders as Alabamashakey, Delightfully Wild and Rockinaroundheaven.

Alabamashakey won her first six starts at Pompano Park for Illinois trainer Rob Rittof and has almost $20,000 on her season card. Delightfully Wild has posted five wins in her last ten starts at Cal Expo for conditioner Libero Pachero; while Rockinaroundheaven, trained by Jim Lackey, has proved best in two of her last four in California.

The Bob Larry (Series No. 3) for colt and gelding pacers with the same eligible conditions as the Walter Paisley, had 13 nominations headed up by the Nelson Willis trainee Hot Rod Dylan, who captured his first eight starts of the year at Miami Valley Raceway in Ohio before a fourth place finish last week at Hoosier Park to a 1:50 flat win.  Hot Rod Dylan, a 4-year-old gelding, took a $17,500 Late Closer Final earlier this month on the Lebanon, Ohio racetrack. 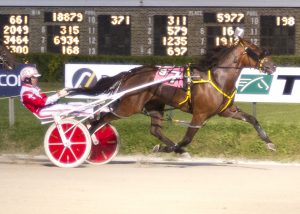 Sporty Redhot, a five-time winner as a freshman, has his sights set on the upcoming Bob Larry Late Closer Series at Hawthorne. (Four Footed Photo)

The Bea Farber Trot Series (No. 2) looks to be very competitive with its 10 nominations that include ICF Violet champ Daisy Lou Duke, from the Steve Searle stable, the Roshun Trigg trained 3-year-olds stake winners Lougazi and Lou’s Credit Report, along with Larry Price’s BC’s Da Winner, victorious in his last six outings in 2016 including the last four at Hawthorne.  El Lobo Hall, Energy Bar, Hatfield And McCoy, I Could Care Less. Lou’s Game And Match and Southern Appeal are the other Bear Farber hopefuls.

The Dave Magee (No. 4) drew the most Late Closer nominations with 22 sophomores on its list. It’s for Illinois bred 3-year-old fillies without $10,000 in earnings as of March 31st.

An even dozen open company 3-year-old male pacers were submitted for the Phil Georgeff (No. 8): Always A Fiji, Getting Rowdy, Heartland Revenue, Kash In Khan, Look At Luke Smile, Pop’s Pool Room, Skyway Fireball, Star Of The Party, Talents Marvel, Tulsi and Western Sangria. The Georgeff is limited to non-winners of $10,000 lifetime (March 31st).

The same conditions apply to the Peter Galassi (No. 7). With only seven 3-year-old filly pacers nominated (Dali Delight, Dry Creek Lis, Getn My Sundaze On, It’s On To Dream, Lakeside Ms Queen, Patches Girl and Rear View) the series could be in danger of being a no-go.

Hawthorne opens its summer harness meeting on Thursday night May 11th. The four-day-a-week format runs through Sunday, September 24th. First post nightly will be at 7:10 pm.