Hawthorne’s first Sunday card of the winter is a good indicator that the winter meet won’t lack for some good trotting horses. On tap are a $10,000 Open Trot and a $7,200 Open III with a full-field of 10 trotters.

The third race Open I feature has a compact field of five trotters with the favoritism likely to be split between the Angie Coleman trained Banker Volo (pp 4, Kyle Wilfong) and the Jim Eaton Stable’s Walter White (pp 5,Casey Leonard) who will meet at Hawthorne for the first time. 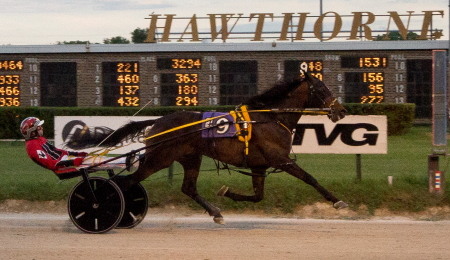 Both trotters raced on Hawthorne ‘s oval but in 2017 they came at different times. Walter White breezed in his June 18 start in 1:55 flat but was sidelined a month later for the year after dropping a photo in a late July Invite at Hoosier Park.

Walter White, a son of Catab Hall out of a Muscles Yankee mare, did go postward 20 times before health issues cut his season short and pulled down over $83,000 for Eaton’s principle owner Robert Silberberg of Farmington Hills, Michigan. The now 6-year-old has a $363,871 career bankroll and a mark of 1:53.4 at Pocono Downs on a “good” surface.

Banker Volo, a nine-year-old Yankee Glide colt, boasts 21 trips to the winner’s circle over his past two seasons of racing for Grinnell, Iowa owner Daniel Roland. The trotter’s career earnings are $353,198 and his lifetime mark of 1:52.3 was also taken at Pocono. 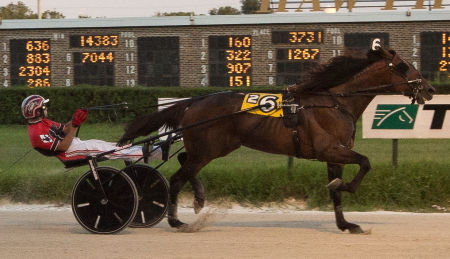 Banker Volo (Kyle Wilfong) picked-up one of his 10 wins in 2017 at Hawthorne. (Four Footed Photo).

Banker Volo dominated the trotting ranks last summer at Running Aces. At one time the gelding captured five consecutive Opens on the Minnesota track where he accumulated the bulk of his $67,685 earnings in 2017.

Banker Volo left for Ohio when Hawthorne closed and won 2 of his last 4 starts at Dayton Raceway. He’s one of the two Open starters who competed in December. The Brandon Bates Stable’s Swan Handicap is the other. The Indiana bred trotter went on Lasix last month and finished second in both of those December outings at Daytona.

Louscipher, currently trained by Ronnie Gillespie (pp 1, Pat Curtin), was a 10-time winner in his 3-year-old season when he captured just about every major ICF stake except the big one. Traffic woes kept the Lou’s Legacy gelding from being any better than fifth as the 2-5 favorite in the $115,000 Erwin Dygert Final on Hawthorne’s Night of Champions.

Louscipher has raked-in $171,927 in his first two seasons for his owners and breeders Flacco Family Farms of Alexis, Illinois.

Madewell Hanover is owned by Allard Racing of Canada and is now trained by Payton Ode.

Five of the 10 trotters in the tenth race Open III boat bankrolls over of over $100,000 with the ICF 5-year-old Primed N Powerful (pp 1, Jamaica Paton) topping the list at $125,646. The Physic Spirit gelding’s 28 lifetime victories are also tops in the field.

A Rockin Start: It was another frigid night of racing Saturday and chalk players got the cold shoulder in the first race opener, the $7,2,00 Open III Pace for fillies and mares.
Mystical Nectar was driven down to 2 to 5 odds in the feature pace and when driver Todd Warren got her to the top on the backside, passed the half-mile pole in modest 58.2 and had command turning for home some of the heavy favorite’s backers were figuring out their winnings.

However Rocking Katie was full of pace and driver Casey Leonard was in a perfect spot to pull off an upset.

Casey had cleverly made the first move on the backside out of third with the 9-1 longshot Rocking Katie and took the pocket when Mystical Nectar came out of fourth in the early going and cleared to the front.

As it turned out Rocking Kate blew right past Mystical Nectar and was well in hand at the finish of the 1:55.3 mile, notching her Hawthorne debut and her first start for trainer Ross Leonard.

Meanwhile Mystical Nectar obviously wasn’t herself on this night. She backed through the field and ended up fifth, finishing ahead of only one mare. Boogie On Down (Kyle Wilfong) took the second place honors, beaten four-plus lengths while Rockin Racer was third in her first start since the end of September.

Owned by the Hoosier tandem of Trent Stohlen ((Markleville) and Tim Goshen (Goshen), the World Of Rocknroll 6-year-old mare Rocking Katie won for the 12th time in 51 career starts.

Casey ended the night with a driving triple and Kyle Wilfong and Brandon Bates each had two winning drives.