Homepage
You are here: Home1 / Mike Paradise2 / Hawthorne’s Winter Star is Back

The “Big Gun” of Hawthorne’s winter meet rolled back into town Saturday night and looks to start off where he ended his first visit, in the winner’s circle.

I’m talking about the 6-year-old pacer Ontario Success who dominated Hawthorne’s Opens when the temperature was often 40 or 50 degrees colder than it is now. Under the care of trainer Roger Welch Ontario Success captured 4 of 5 local starts against the best horses on the grounds and was second in the other.

There’s a $13,000 pot on the line in tonight’s eighth race feature and Ontario Success landed his first inside post, the two, after being handicapped with outside posts in his last Hawthorne four start. 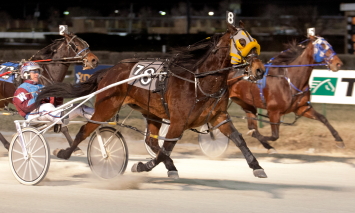 Ontario Success (showed in Four Footed Photo) is well rested and has been pointed for this Series.

The horse went back to Pennsylvania after his last Hawthorne triumph for some R & R. Trainer and part-owner Ron Burke qualified the gelding on May 3 at The Meadows and Ontario Success romped home in 1:54.2 on a sloppy racing surface.

Four days later he was in Indiana where he uncorked a 1:52.1 front-end winning mile in his qualifier at Hoosier with a :26.4 last quarter with more left in the tank.

“The horse had a terrific winter at Hawthorne,” said his Illinois trainer Roger Welch. “Their plans were to rest him after that meet and then get him ready for the summer here. They trained him back themselves and I picked him up right after his May 7 qualifier, which was a good one.

“He’s a big, long horse who is fresh for Hawthorne and looks ready to go.”

Casey Leonard will take over the lines on Ontario Success with the horse’s winter meet driver Sam Widger competing at Hoosier Park Saturday.

Getting Casey for Ontario Success was a pleasant surprise for Roger.

“When I entered him it was with no driver. I knew Widger would be in Indiana. I later talked to Pete (Hanley, Racing Secretary) to see who was available to drive. He told me Todd (Warren) won last week with one of the horses in the race (Freedomformysoul) and (Dale) Hiteman was on another (Kolt Power).

“I asked if Casey had a drive in the race and he said no so I said let’s put Casey on him. The Leonard’s have some good horses and I thought maybe Casey was going to drive one of them. Instead it turned out he was available so we got Illinois leading driver.”

I’ve listed made Ontario Success in 7-5 in my line.

Ontario Success will need to be tight and ready for a big effort following his three months off because there’s seven very solid pacers looking to pull off an upset and grab the $7,500 share of the $13,000 post in Saturday’s feature.

The Ladies Turn: The gals took over the opening rounds of the Late Closer Series Friday night and there were some surprises headed-up by Bernie and Deb Paul’s Seeyouatthefinish (1:58.2) triumph in the featured $13,000 event for winners over $1,000 per start.

Kyle Husted gave the 6-year-old a great trip and she popped at $48.40 on a sloppy racing surface.

Casey Leonard bagged more four winners and they included the Bob Walker trainee Bucklegirl Bobette (1:56.4) who overcame the second tier’s 12-post in a non-winner of 2 series for ICF distaffers at $10.20 and the Mike Brink Stable’s Vorst (1:58.2) at $24.00 in the non-winners of 2 for open company fillies.