Only the second Open Pace for fillies and mares thus far at the Hawthorne meeting is Sunday’s showcase event and there isn’t a clear-cut favorite. Nevertheless, it’s likely the eventual public’s choice will come from a trio of Hoosier Park invaders—Debt Motivated, Lovethewayoulook or Sweetshadyshark.

If you’re a fan of “Horses for Courses,” then Sweetshadyshark (Ryan Anderson), would get your vote. The Ronnie Roberts trained 6-year-old mare, was a 10-time winner in 2018 and 9 of those triumphs came at Hawthorne, including a pair of Open triumphs.

Sweetshadyshark raced in mostly $10,000 claimers in the early part of last year and won three of those events at the winter meet and pair of others during the summer. Roberts claimed her last July 28th and the mare’s new Illinois owners Brian Wulf (Grayslake), Robert Wulf (Plainfield), Randy Alderks (Plainfield) and J R Frasher (Grayslake), got some quick returns for their bucks. 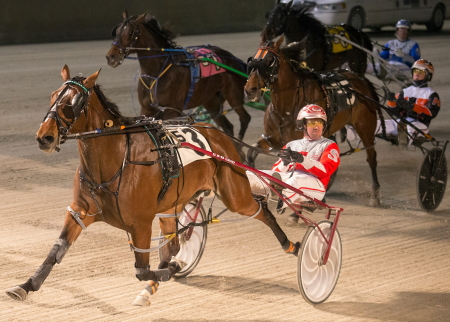 Sweetshadyshark, a frequent past winner at Hawthorne, is back from Hoosier Park for Sunday’s $12,000 Open for pacing fillies and mares, (Four Footed Fotos)

The Shadyshark Hanover mare banked over $16,000 in her next four Hawthorne starts, with three wins and a second in a $10,000 Open. However, the mare would then spend the rest of the year campaigning in Indiana and Ohio.

Sweetshadyshark did make a start at Hawthorne this past May 18th and all she did was win again, this time with a new lifetime mark of 1:51.4.

Unraced at two, the Indiana bred Debt Motivated, made over $60,000 in her 3-year-old season. Her maiden win did originate at Hawthorne in mid-January of 2018, with Casey Leonard driving. The filly subsequently, went to Indiana and later competed in Ohio for trainer Ross Leonard.

The 7-year-old mare Lovethewayoulook (Kyle Wilfong), boasts career earnings of $226,538, over $100,000 more than any of her six Sunday evening rivals. Trained by Brett Wilfong, the home-bred had two last quarters under 27 seconds at Hoosier in early May, so Hawthorne’s longer stretch should suit her.

Lovethewayoulook last raced at Hawthorne back in 2017 when she went winless in three trips postward.

Still Perfect: Captain Mulzac, driven by his trainer Ronnie Gillespie, extended his unbeaten record to four in a row, with a two plus length victory in Saturday’s eleventh race feature.

Owned by Mississippian Roshun Trigg, the 3-year-old colt paced the 1:52.3 mile in front-end fashion, coming threw the last quarter in 26.3. Hart To Heart (Casey Leonard), had a big effort from the 10-hole to be second.

Pricy Winner: Earlier on the card Matt Avenatti drove his first winner of the meet, when he guided the 5-year-old trotting mare Cinder Norma, to a huge upset in the seventh race at 70-1 odds. Trained by Dave Avenatti and owned by Wyatt Avenatti, Cinder Norma paid a whopping $143.20 mutuel and keyed a $1,568 payout, for a winning 25 cent Superfecta ticket.