Driver Kyle Husted is back on the east coast with his stable of horses but not before he left town on a high note, bringing home three winners of Hawthorne’s Night of Champions.

The 27-year-old Husted has steadily progressed as both a driver and trainer since joining the local driver colony on a regular basis in 2010. He went from 14 driving wins in 2010 to 108 in 2016 when he spent split his year between Hawthorne in the summer, and east coast tracks the rest of the time. 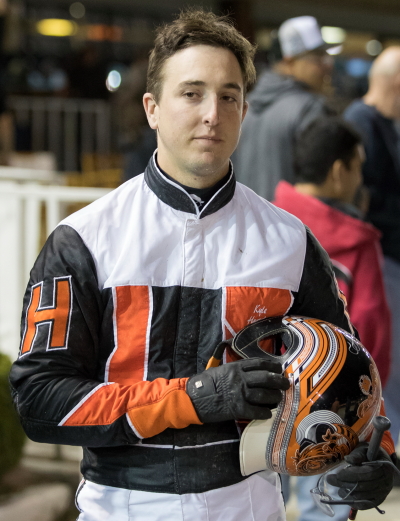 “Driving out east against some of the best drivers and on a lot of different tracks has helped me process,” said Husted. “Every year I’ve learned more and more and each time I come back home for the summer, I feel I’m a better driver than when I left.”

Husted’s Hawthorne stats back him up. his summer he had a 15 per cent winning clip and over a 44 per cent success rate with favorites. The explanation point came on the Night of Champions when he won the Fox Valley Flan with the freshman filly trotter Louzotic, the Beulah Dygert 3-year-old filly trot with Trotting Grace (both Steve Searle trained fillies) and the Plum Peachy with the 3-year-old filly pacer The New Americana, conditioned by Harold Herrera.

Kyle was second in another NOC final and third in two others, and was nosed-out of another third with He Gone Back in Molaro showdown.

Husted had this to say about his three winning NOC horses:

“Louzotic is a nice little filly, “said Kyle. “When I was driving against her early on I always thought she was the best in the division. Steve (trainer Searle) did a great job of having her ready for the bigger money races later in the summer. After Springfield I got an opportunity to drive Louzotic in her last three starts (all wins) and she showed me just how good she is.

“I drove Trotting Grace all summer and she was good from the time Hawthorne started. She got sharper and sharper as the summer went on and pretty much dominated her division the last couple of months.

“The New Americana was at her best at the right time. When she changed barns for her last couple of starts I decided to change tactics with her. I took a shot and put her on the front and she came up with a big winning effort. She was a different animal in the championship. She raced brave and with more confidence.”

Husted left Illinois with 79 winning drives in 2018 and more importantly with almost $850,000 in purse money won with three months of driving still left on the year.

Casey will also drive Trashytonguetalker, an eight-time victor this season at Hawthorne, in the $11,000 second race conditioned pace and the Ross Leonard Stable’s This Peach Rocks in the $18,000 tenth race for Indiana sire 2-year-old pacing fillies.