While watching current Illinois champion pacer He’zzz A Wise Sky demolish yet another Hawthorne Open field last weekend, it was obvious that the Race Office has no answer at this time to keep the pride of the Triple ZZZ stable from making a mockery of the meet’s top overnight division.

The now five-year-old ICF homebred pretty much did the same thing last year, so I had to remind myself that when the chips were down on the 2021 Night of Champions in the Robert S. Molaro Memorial Final it wasn’t He’zzz A Wise Sky who made a stop in the winner’s circle.

In fact, the 2020 and 2021 Illinois Harness Horse of the Year didn’t even get the second-place money in the $64,000 state-bred stake. That went to Fox Valley Ren with the very popular Fox Valley Gemini taking home the big prize for the fourth consecutive Molero Night of Champions time.

He’zzz A Wise Sky was burned to a 27.2 first quarter leaving from the seven slot in an eight horse field to get to the top that night. A 27.3 second quarter was followed an even faster 27.1 third panel and the heavy favorite, not surprisingly, was a tired horse in the late going.

Be that as it may. The John Filomeno trainee has hardly broke out in a sweat in any of his four-for-four Hawthorne triumphs but tonight he’ll go here the “going gets tougher”, the Opens go faster, and money is a lot more lucrative.

He’zzz A Wise Sky landed the outside nine-post in Miami Valley’s $30,000 Open I that was drawn by groups. The prominent ICF pacer must be highly regarded in the Buckeye State as well, because he was one of three horses drawing for the outside posts and will open at inviting 12-1 odds.

Only Francis Underwood and Mastery did enter for tonight’s Hawthorne Open. So instead, we have a very competitive nine-horse field going in an Open II with a $11,700 pot on the line. 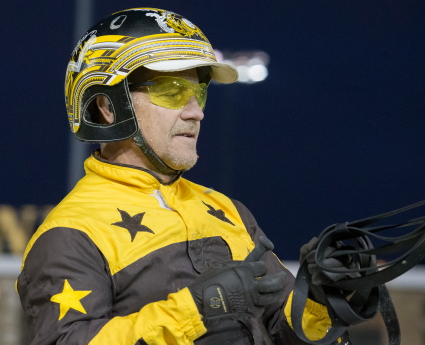 Veteran Mike Oosting is currently on top of the Driver Standings at the Hawthorne Winter Meet with 27 winners going into Friday night. Casey Leonard and Kyle Wilfong are close behind with 22 and 22, respectively. (Four Footed Fotos)

Take a Dart: The Feature is a headscratcher because it’s hard to throw out pacers that look non-competitive. In fact, there are several horses that could come away with the victory that were drawn by divisions.

No. 1 was assigned to Wyatt Avenatti’s Mastery who took a shot last week to become the sixth horse in the Open I and came away with a fourth place check worth $1,096.

Post 7, 8 and 9 were also drawn and will be manned by The Thunder Rolls (Kyle Husted), Fox Valley Gemini (Casey Leonard) and Gotham Hanover (Travis Seekman), respectively.

I chose Fox Valley Gemini as my top choice, but that might have been done more with my heart than my head.

The programed favorite is No. 2 Jersey Jim at 3-1 from the Merv Chupp Stable and he looked very good rallying in time from his last start and beating some of the same horses he’ll take on tonight.

Acquired for $17,000 at the 2016 Standardbred Sake, Jersey Jim wasted no time getting his purse price back and a lot more for the Beecher, Illinois couple by winning the $225,000 New York Sire Stake Final at Yonkers as a two-year-old.

With the depth of tonight’s solid Open II field a victory tonight should reward Jersey Jim backers with a much better wagering value than 3-1. The seven-year-old’s $321,789 career earnings are the second highest in the field to Fox Valley Gemini’s $591,077.